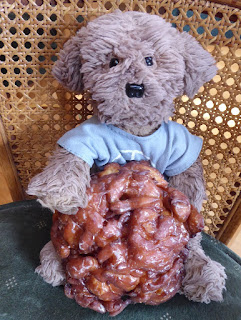 I used to think donuts were the perfect food. Donuts never let me down. Every single donut was a triumph. Even old donuts were fine. Mom used to pick up powdered donuts in a box at the store whenever a rare run of good behavior on my part coincided with her own cravings. I still remember how the powdered sugar felt cool on the lips. Later, in high school, a bunch of us used to make a donut run in Sue Martin’s Barracuda when we were skipping out of the Literary Magazine period. (The literary magazine staff was assumed to be mature, and lightly supervised.) I had gone over to jelly donuts. Still basically a powdered sugar donut, with a bonus.

Moved on to Glazed in college, when I’d pick up a single donut at Mr. Donut for my lunch, because it was cheap and satisfying and it had not yet occurred to me that good nutrition might ever come in handy or not involve donuts. It took years to shift to a different diet, but eventually I was able to break the donut habit with a smooth transition to pizza and beer. By the time I got my postal job, I wasn’t buying donuts anymore at all. 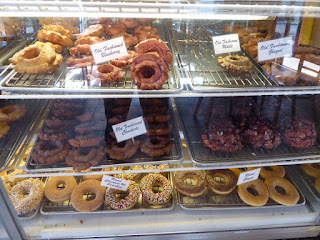 No, I ate donuts only when they were free. And that happened all the time. Someone was always retiring, or leaving the station or coming into the station, or having a birthday, or winning the baseball pool; or we employees had somehow inadvertently done something arbitrarily laudable that the boss rewarded with donuts. Donuts were postal currency.

Not only that, but every eight weeks I gave blood at the Red Cross on Tuesdays, because that was the day they served Krispy Kremes. Until the day they didn’t. Someone in the Red Cross hierarchy decided that Krispy Kremes were likely to provoke a flu epidemic, which might be a legally actionable event, because flu sufferers were known to want to give blood and then paw through all the identical donuts looking for the right one. Tongs, people! Have the grizzled old volunteer dude shuffle over with a box of donuts and tongs! No. Donuts were gone. I developed blood donation difficulties soon after. 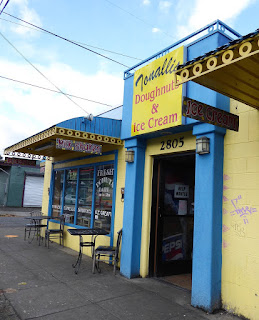 So now it has been literally years since I’ve had a donut, even though I really, really like donuts, and there’s a spectacular donut shop around the corner. I try not to eat wheat, and somewhere under the sugar and grease there’s wheat, probably.

Until today, when our lovely neighbor Kate came by with a buttermilk donut for each of us. Ohhhhhhh. Donut. “I love you,” I said to my donut. “I’ll never leave you,” my donut said to me. Now we are one. Now I use the pronoun “we.”

We’re thinking about going for a walk later today, my donut and I. We’re not sure. But we might.