Mouse On The March

I was thinking about my cousin Don the other day, and wondering what he was doing. I was hoping it wasn’t the dog-paddle. Don lives in Minot, North Dakota, where the Mouse River has been over-expressing itself of late. It’s not a really big river, but it doesn’t have to be to cause trouble, because it runs through really flat terrain. Any water that breaches the banks will flow wide and far. There is some variation in elevation in Minot, but a lot of it is caused by moles, and I don’t know the town well enough to know if Don’s house is built on a molehill.

Obviously it isn’t completely flat there, because otherwise there wouldn’t be a river. It would just be a sea. That’s what used to be in North Dakota, a big inland sea. We know that for a fact because of the work of scientists in the fields of geology and paleontology. Discovering things like the origins of our topography allows us to have topography of our own. Everything we learn builds on everything else we learn and directs what we might learn next, until our knowledge accretes in hills and ridges and uplifts and moraines from which we can see splendidly. It’s a beauty and a joy. 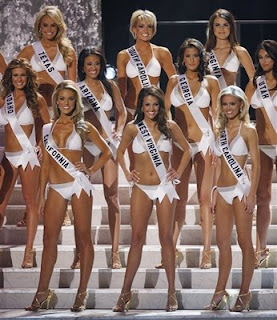 Looked at that way, and only that way, the contestants in the last Miss USA pageant are really flat. Each was asked the same simple question: should evolution be taught in our schools? And nearly every aspiring queen had the same answer. Only two betrayed the slightest familiarity with science. They reacted as though the interviewer had farted in church, then regained their poise and merrily allowed that maybe evolution should be taught “too,” so that children have a chance to learn “both sides” and decide for themselves what to believe. This is a land of freedom, and every child should have the opportunity to conclude that she is living on a five-thousand-year-old landscape the shape of a dinnerplate under a whirl of spinning stars that have a say in her love life, if that’s what she wants to believe. God bless America! 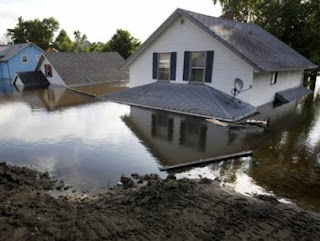 Meanwhile the Mouse floods like it’s never flooded before, tornadoes strafe the prairies and speculate into New England, islands sink and glaciers die and vintners prospect for land in the Yukon, all of which was accurately foreseen by scientists from the high ridges of their own hard-won education, and nothing can be done about any of it because a small number of powerful people have enough money to buy a controversy where none exists. And when years of deliberate miseducation have flattened out our population, a little stupid can flow wide and far.