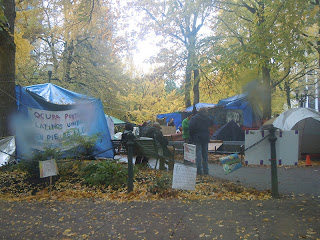 To those who say America has been asleep, lulled by television and cheap electronic toys from China, unaware of what has been taken from us and not moved to protest, I give you Portland, Oregon. Here, sir, we have had a sustained demonstration of outrage and indignation for over five weeks now. We will not be ignored; we will stand up for what is right, we will demand redress. We have just had another change in our garbage service inflicted upon us and we aren’t going to take this sitting down.

Yes, we are maintaining a proud tradition of civic whinging that goes back centuries, from when the Romans put together the entire aqueduct system for water delivery. Oh fine, the collective populace said. And here I am with a slave, eight daughters and a fortune in buckets–what do you expect me to do with them? 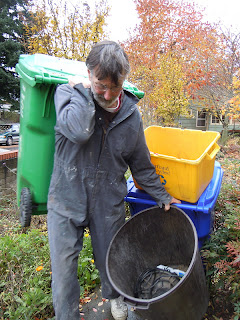 We citizens were not consulted, unless you count that extended public input process and the publicized three-month trial study. Because if we had been properly consulted, we would have made clear our desire to have the mounds of debris from our daily lives suctioned out at the curb on a weekly basis, just like always. Only cheaper, because we’d strip the fat from the bloated bureaucracy. If the government absolutely must tinker with our garbage service, it could pave a turn-around up at the edge of the national forest where we dump our mattresses and old refrigerators.

Because left alone, dammit, we are a productive people. We produce unfathomable volumes of crap every day, and if the government would just take it away and quit spending money on pamphlets about it, we could produce even more. The pamphlets purport to educate us about the changes in our garbage service.

Do you know where your garbage goes? 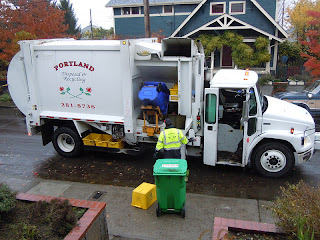 We used to jam everything, rocks and concrete and stinky fish and dead possums and everything, in one big can and the trucks rumbled up the alley and made it all go away. But that isn’t good enough for the nanny state. No, some bureaucrat with absolutely nothing better to do decided to make the trucks come up street side, and we got ugly yellow crates to put our cans (flattened, labels removed), glass (separated), and newspaper (bagged up) in. They would never have gotten away with it had they not anticipated the uproar and brainwashed our children about recycling via socialized education, and the little scolds did their dirty work for them. That’s right: they made us do more work, and charged us more for the privilege. You know, a person who works all day long might want to have a moment to relax and have a couple dozen Buds and toss the cans in the garbage, but no. What’s next? Will we have separate containers for white Styrofoam peanuts and colored Styrofoam peanuts?


Fabulous. Now we have two big ugly bins and one smaller one plus our original garbage can. We don’t even have any yard debris. We’ve got Mexicans for that. They cart it away and, I don’t know, put it in tacos or something. Can we put our Christmas tree into the yard debris bin?

Not unless you chop it up first, and the trunk is under four inches in diameter.


I see the government’s War On Christmas is in full swing. All right. We’ll ignore the yard debris can as long as you keep hauling off our garbage once a week.

About that. We’re going to give you a free countertop compost container and you can now fill up your yard debris bin every week with all your kitchen scraps, including bones and meat and napkins and pizza boxes and crab carcasses, but we’ll only pick up your other garbage every other week.

Well, the stuff that smells is what you can now put in your yard debris can. Which will get picked up every week, just like your regular can used to be.

We told you what to do before, when we came down the alley and picked up all your crap in the giant can on a particular day for a particular price.


Yeah, but that was the arrangement our forefathers got set up for us when they told us to cast off the potato peels of oppression. That was okay. 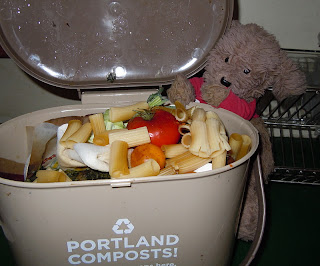 Call me contrary, but I like all the changes. To me they indicate that the government workers I hired to figure things out have, in fact, figured things out. They have studied the problem of diminishing landfill space with a mind to what is environmentally sound, and they have come up with solutions that will benefit us as a society. That, to me, is what a government of the people should do. It’s worth celebrating.

And once we winnow out all our food crap and our paper crap and our recyclable crap and our tin foil and our glass and see what is left to put in our garbage cans, we will discover that it is mostly huge piles of plastic crap that we can barely avoid acquiring, because that is how all our goods are packaged now. And we might then be moved to do something about all that packaging, at the source. A few years back, some of our representatives tried to introduce legislation to do just that. But the packaging producers got wind of the plan and poured enough money into the legislators that the problem went away.

That is the other way a government can be run. Kinda stinky.