The Murre, The Merrier

Sarah Swanson is a very nice person who thinks my blog is hilarious. But I repeat myself.

She wrote me a letter asking if I’d like to join her Audubon Birdathon group. It’s a fundraiser. People can sponsor you with a flat donation or give you a dime or so for every bird you turn up. She hoped she wasn’t being presumptuous. What Sarah didn’t understand is that if you tell me you think my blog is hilarious, I will bake you brownies. I will pick up trash on your section of highway. I will paint your house. Of course I agreed to go along. “But I might not be very helpful,” I pointed out. “I love birds, but I’m not good at identifying them.” My brain is like a colander. It’s well-ventilated, but real knowledge runs right through it, leaving behind the noodles of unrelated factoids.

Sarah didn’t mind. Her fearless group is named “The Murre The Merrier,” and I could be their mascot if nothing else.

Still, I thought this time I might come in handy. I’d just come off of a week of birding in West Virginia, home to 14,000 species of migrating warblers, and I got to where I could pick out those little treetop nuggets like nobody’s business. Sadly, in Oregon we only have two warblers, Steve and Larry, and Larry is peevish and shy.

Sarah gathered her platoon of bird warriors and gave us the battle plan. We were aiming for 100 species. She and her husband Max Smith had scouted the territory for key locations, and she intended to keep us on the march to cover them all. There would be no dawdling on this team. This was not a walk in the park: this was full contact birding. Sarah slipped a sharp stick into her pocket and off we went.

Our little score card lists 376 bird species we might encounter in Oregon. Of these, a hundred are bashful, a hundred more are just passing through, and some, like the Flammulated Owl, are entirely made up. We began on the grounds of the Hillsboro Library. In under an hour we had bagged 30 species, including a confabulation of acorn woodpeckers and a great horned owl. Excellent, I thought. In another two hours or so we’ll have this baby wrapped up. We moved on to a wetland. “We’re looking for bittern, marsh wren, Virginia rail, people. Go, go, go!” We went, went, went. We scored, scored, scored. Sarah mashed us all back in the van and we hurtled off for the coast. Birding is always an adventure, not least because birders drive with their heads out the window and cranked up toward the sky, and they brake for no apparent reason.

Haystack Rock is an iconic geological wonder in Cannon Beach formed from millions of years of accumulated bird poop. We met up with our totem birds, the short, stout, plain little items inexplicably named Murres. Pigeon guillemots. Brandt’s cormorants, their turquoise throats flapping in the sun. Sarah retrieved a cattle prod from the glove box and away we went again.

It was a sharp group. I was completely outclassed. Halfway through the day my strategy was to look for very recognizable birds we hadn’t seen yet, but when someone else spotted the Great Blue Heron (#64), I had nothing left in my quiver, and was reduced to wasting everyone’s time by pointing out suggestive sticks in the water and little lichen-covered bumps in the trees.

We racked up shorebirds by the plattersful, whimbrels rocking up and down like sewing machines, red-necked phalaropes spinning in circles like gears, and turned back inland, inching towards the 100th bird, the trumpeter swan. We reached a consensus on the trumpeter, after failing to find the tiny yellow spot that would mark it as a tundra swan (although, according to the field guide, some of the tundra swans also lack the yellow spot, and yes, this is deeply unfair). And then we scored a back-up snipe. Which we needed when the trumpeter swan was revealed to be somebody’s pet. Sadly, birders are much burdened by ethics. 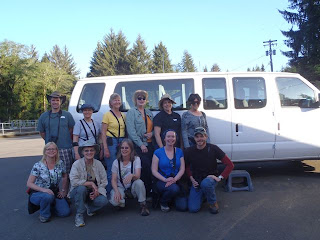 And then off we raced to a couple more spots in the woods before collapsing exhausted, twelve hours in, with a total of 105 species. Sarah stood proud against the sky, triumphant and satisfied, resplendent in fishnets and leather and stroking a small whip. Let it never be said birding is a sissified venture.

I, for one, am completely flammulated.