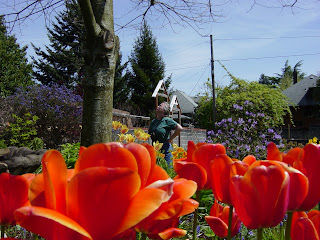 Today I am winging my way to a birding festival in West Virginia. “But Murr,” you are saying, “you don’t know poop about birds.” Not true. I know more about birds than the average person. It is only in the company of genuine birders that I come off lint-headed. Sadly for my reputation, there are birders everywhere. Look at the person to your right, then to your left: one of you has a life list of 350 birds, one of you is a Republican, and one of you will die soon. I’m throwing my lot in with the bird people.

And I know a little already. I even have a vestigial biology degree. But I couldn’t tell a greater spindly-legs from a lesser spindly-legs unless they were standing right next to each other, and even then I couldn’t rule out that one of them is just a freak. 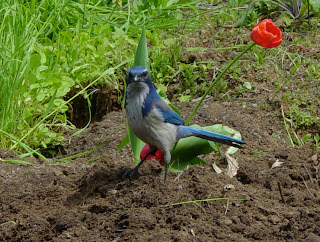 The fact is, I’m not a very good birder. Well, I’m not actually a birder at all, but not for lack of trying. Well, okay, it is for lack of trying, but it isn’t because I don’t aspire to birderdom. Well, I don’t really aspire to birderdom. I’d just like to be able to know what a bird was when I saw it. Okay, I’d like to be able to see it.
I’d settle for that. I walk in the woods a lot, and if I had to rely strictly on the evidence from my own eyes, I’d have to conclude that Trees Make Tweety Noises.
Here in town, I’m pretty reliable spotting any of the five birds that frequent my yard. We have chickadees, scrub jays, juncos, little brown jobs and a finchy number. I do know their names. The finchy number is Boo Boo, and the big blue-headed fellow bashing in a mouse’s head on the rain gutter is Guido. A little further afield, it’s not uncommon to spot a flock of yellow-headed snatchflashers down on 82nd Avenue. 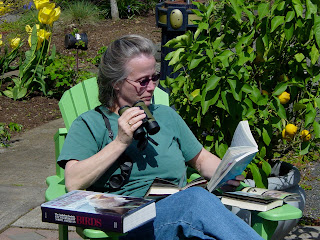 Anywhere else, I have to use my binoculars and a field guide. This never works out for me. Once I locate the bird, I document it exhaustively: white eyestripe, grey breast, spot on the wingtips and a light patch on the tail. Then I get the guide. Which says that nothing is conclusive unless I can verify the yellow undertail coverts. How am I supposed to verify anything that is under tail and covert? Without being rude?
Or I’ll memorize eight features on a three-inch bird and find that it is still not in the book anywhere, which sends me whining to a real birder with my description. “Hmm,” real birder says thoughtfully. “Might be a juvenile, or a variant.” See, that’s just not fair.

Many people see no reason to know all the birds and their little bird parts. But I am not among them. I know that in life the more you know, the more you can see, and the funnier it all is. If you see a giant slug on the trail in front of you, you might be inclined to step over it in distaste like it was God’s Loogie, unless you also knew that it has an enormous, diaphanous blue penis coming out of his head. I don’t care who you are: that is interesting.
So how did I go from Boo Boo and Guido to the New River Birding And Nature Festival? It started innocently enough. I had this teeny little blog no one read, and then one day, through Internetular magic, a woman named Julie Zickefoose tripped over it and liked what she saw. I liked her back. She sent her whole tribe my way. They were birders, she turned out to be their Queen, and now I have a Facebook page infested with nature lovers I’ve never met in person. They keep me up-to-date on such things as the first phoebe sighting of spring, or the first peent of the woodcock, or the fact that there is such a thing as a woodcock, or that he goes peent. I’m getting all knowledged up, and look forward to getting even educateder.
But if Julie had been an astronaut, just think of where I’d be flying off to now.
I’ll be off the grid and undercover with the birders for a week, but I’ve got Murrmurrs loaded up and ready to poop out posts on schedule while I’m gone. Meanwhile, if you want genuine Julie Zickefoose Woodcock Underpants, and I know you do, click here.
By Murr Brewster|2021-11-09T21:29:20-08:00April 24, 2010|Uncategorized|32 Comments