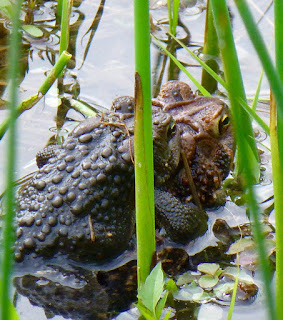 It’s spring, and–I know you’re all with me on this–our thoughts invariably turn to amphibian sex. It’s obvious to me, as a volunteer Frog Shuttler, that frogs are highly motivated to reproduce; the males somewhat more avidly, I think, but I could be projecting. Male frogs are hoppiting to the vernal ponds well in advance of the females, but the females do get it in gear eventually, and then there’s lots of hugging and cuddling and things squirt out and new frogs happen.

All of that sort of makes sense to most of us. The frogs reproduce by means of external fertilization, meaning they need to provide the materials for tadpole assembly, but it all happens outside of the bodies of the consenting adult frogs. Still, we all recognize an embrace.

It’s the salamanders that always seemed more problematic. The literature is straightforward. With few exceptions, they fertilize internally. Now you’re talking, we think. But no. The male deposits a sperm packet somewhere, usually in water, and then the female meanders over and picks it up later with her hoo-hoo. And then the internal fertilization takes place. 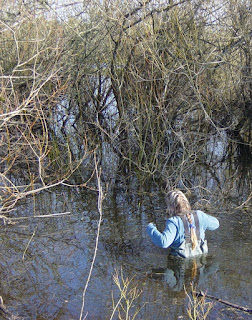 This doesn’t make sense to us. It feels remote. There’s not enough…friction, let’s call it. Even Louis C.K. never said “If you don’t mind, I’m going to jack off over here, and then, what say you come over and sit on the wet spot?” Nobody really wants to sit on the wet spot. Although, of course, if it’s underwater anyway, it’s probably not such a big deal. Still, where’s the female’s motivation?

Newts, as anyone staring into a pond in springtime knows–and isn’t that all of us?–are very handsy. They are all over the females and they aren’t interested in letting go. Sometimes a lot of males are all over one female, creating something called a Newt Ball. Nothing about this seems sexually persuasive, and in fact, females have been known to drown in the attention. Although in many species across the animal kingdom it is the females that choose their mates, this may not be the case for newts. However researchers have discovered that there is at least one newt species in which the female sometimes gets out of the situation by feigning death. You do what you have to. 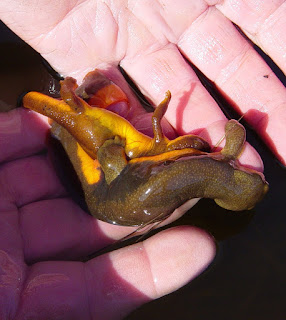 Well, what apparently seals the deal with salamanders is our old friends the pheromones. The males produce pheromones that entice the females to swell up in the critical sperm-packet-reception area, which probably feels better than it sounds, and in some cases they lead the female to the junction as well. In one observed species, the male deposits his sperm packet, which probably feels better than it sounds, and then wafts pheromones toward his female of choice (basically all of them) and coaxes her to follow him as he backs up toward his packet of Genetic Legacy, and then when she’s in the right spot he turns sideways in a blocking move.

It all seems to work and I doubt there’s anything clinical about it. We are not in turkey-baster territory here. Probably I’ve been thinking about it wrong. We all know how it feels to be massively attracted to someone clear across a room, even before any friction is involved. We don’t really understand that either, but it is undeniable. So that’s the deal with spring salamanders. It isn’t only about sex.