Next Up: Jesus Of Bazareth

The body of Jimmy Hoffa was very nearly found again with the help of a psychic. All the world’s psychics together have, over the years, made great strides in narrowing down the possibilities as to his disposal. This latest effort, which involved tearing up a driveway in Michigan, began with a rumor. Local resident Mike Smith said his sister thought there was a body under the driveway, and that she had special powers. “She told me she was getting a name,” he said, “and it was something like ‘Jimmy Joffa.’ I’m telling you, it made the hair on the back of my neck stand on end.”

The phenomenon in question is called “horripilation,” from the Latin pilus meaning hair and horrore meaning “to go POINK,” or as it is commonly translated, to bristle. Thus “horripilation” is the go-poinkiness of hair. (The word “horror” to this day is applied to the appearance of chin whiskers in post-menopausal women.) The sensation of hair standing on end is a natural occurrence in humans and other mammals, and is a response to both fear and cold. Each hair follicle has a tiny adorable little muscle attached to it that contracts to erect the hair, and also causes the skin to bunch up at the site. If someone were repeatedly frightened enough to exercise the adorable little muscles, they might bulk up to the point of making the skin look like Velcro. 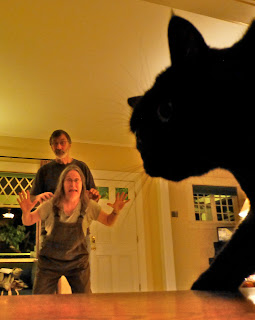 The erection of the hair serves two purposes. One is to trap more air as insulation. The other is to make the owner of the hairs look bigger. This is thought to be an effective deterrent against many predators. We were told that the best defense against cougars is to look as big as possible, and with that in mind, I suggested to Dave that, should we come across a cougar on the trail, I could climb onto his shoulders. He assured me the same effect could be managed more easily if he were to just hold me in place in front of him. At any rate, the sea otter is known to use this defense when in the presence of sharks, and I’m sure it works well for them. Nothing arouses more trepidation than a big fluffy otter.

So our friend’s reaction to his sister’s conjuring of the name “Jimmy Joffa” is, essentially, a fear reaction. Most people are fascinated by extra-sensory perception, but also a little frightened of it. It appears to be a power that has no explanation, and is thus creepy. Similarly, a huge swath of people today are creeped out by any knowledge that appears to be gained through mysterious means, such as studying in science class. 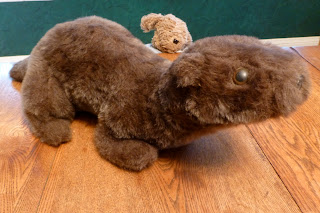 In this case, no body was found. Experts say that there has not been a single case of a missing person found as a result of a psychic’s intervention. Which means that, collectively, they’re due.

When it comes to ESP, I do not scoff. I myself have had a number of such unexplainable experiences. One time I suddenly went cold all over, and my skin got clammy, and I was overcome, from the very core of my being, by the feeling that something very bad was about to happen. And sure enough, I threw up.