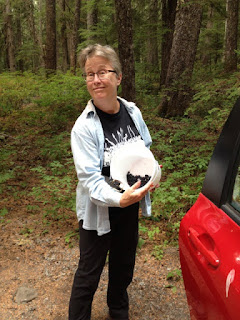 It was early September, time for Mary Ann and me to go on our annual huckleberry hunt. This year I hadn’t had a chance to check out the crop in advance, so we didn’t know what to expect. The last two years, boy howdy, the bushes were nuts. Huckleberries pushed at the margins of the forest like they were behind the velvet rope at the nightclub, saying Pick me! Pick me! And, like roadies with all the power, we were able to select just the prettiest ones most likely to put out.

“But you never know,” we said this time, perfunctorily modest. The fates frown on audacity.

You never do know. Still, we approached our berry grounds with all the anticipatory glee of a postal worker taking his paycheck to Reno. And we pulled up to our accustomed turnout and charged into the woods with empty buckets and full hearts.

A half hour later, the hearts were running a pint low but nothing else had changed.

“Do you suppose it’s been picked over?” Mary Ann wanted to know.

No, I didn’t. They don’t all ripen at once, and ordinarily you can see little berries all green with ambition right next to their voluptuous sisters. What we had here was that rare non-existent variety. We’d brought along our friend Margaret and a huckleberry hound for good luck, without vetting either one properly for auspiciousness. But berrying is a bright and hopeful pursuit and we gave it all we had. An hour in, I had thirteen berries to my credit. They huddled along the bottom of my bucket like the skinny, morose kids about to be picked last for dodgeball. There were few enough that I got to know them by name, and have favorites.

Two hours in, I had begun to scan the smaller alders in case our berries had switched teams since last season. Whereas the alders failed to turn up any huckleberries, it must be noted that they didn’t produce much fewer than the huckleberry bushes did. 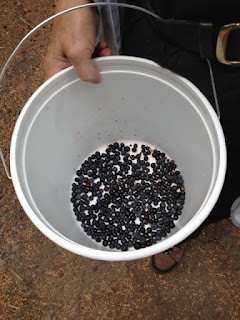 Well, you can keep this sort of thing up for hours at a time, especially if you are content to sift quietly through the dappled light of a fir forest to no particular end. There is a restorative quality to the early-autumn slant of sun in the woods, and although this year it has a pinkish cast from not-so-distant fires, it still feels like a benediction. And one of the beauties of our local berries is that you don’t have to bend over for them. In fact, I’d say just about all the berries that weren’t there this year were at waist-height, probably.

After 7.5 berrypickerhours and a consolidation, we had finally covered the bottom of one bucket, assuming it was kept level. We could achieve two pies if we used jar lids for tins. And added apples.

But that’s two more huckleberry pucks than we’ve made all year. We’re chalking it up as a win.