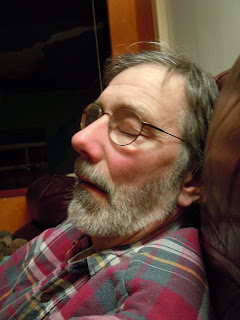 Dave snores. It’s not so bad. Mostly it’s just one big chainsaw outburst after a nice six- or seven-minute interval during which he does not breathe at all. It’s called sleep apnea, and it wouldn’t be a problem except for that danger of death thing. There’s supposed to be a significant increase of mortality among people with sleep apnea, although no one mentions that dying in your sleep is pretty much the ideal way of going about it, and besides, how do they know the apnea got them? If they just notice people die after they haven’t breathed in a while, that could be dang near anything. Anyway, right after I diagnosed this condition off the internet, and put in ten or fifteen years of nagging, Dave went in for a sleep study. He was worried about it because he has trouble sleeping and he couldn’t imagine that being wired up in a strange bed was going to be conducive to dropping off. But it wasn’t a problem. They just drugged him right up and out he went. He concluded that the reason he had trouble sleeping was no one had given him the cool drugs before, and thought that should solve the whole thing, but they weren’t going for it. Surprisingly enough, they also decided he didn’t have apnea, or at least badly.

So now I’m putting what I thought was apnea in the same category as Other Odd Metabolic Metrics Of Dave. For instance, he has a pulse of around seventy beats an hour, his cholesterol is below zero (he eats so much butter the fatty deposits slide right out of his bloodstream), his blood pressure indicates his circulatory system is more of a puddle, and he requires little oxygen while sleeping, shutting down like a frog in ice. At any rate, I’ve quit worrying about the snoring. It was never as impressive as that other noise he makes from time to time while asleep, a high-pitched high-decibel ripping volcanic blast that causes regiments to leap out of bed and stand at attention, and wood-chippers and leaf-blowers to revere him as a god. I am, as regular readers know, far too much of a lady to divulge the source of this phenomenon, but it is world-class.

He claims I snore, too, enough to ripple wallpaper and make the shades go up and down and change the channels on the TV in the next room, but he is given to hyperbole. My main problem while asleep is that I am a fountain of drool. I wake up several times a night to discover the lower half of my face has gone slack, sprung its elastic and sprawled over the pillow. And since I am primarily a stomach-sleeper, this means I am waking up with one cheek and nostril in the Atlantic Ocean. I roll to the other side and plant the other cheek in the Pacific. There’s no escaping it. 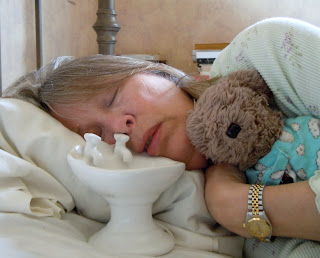 I didn’t always drool. It started on a specific day, the day I had my lower wisdom teeth sawed out of my face at age sixteen. Dr. Mengele recommended I press tea bags to my gums if the bleeding was a problem, but I was unable to fit that many tea bags in my mouth. The bleeding went on undiminished for a good four days, during which time my digestive system had time to come up with a new plan for the hours I was asleep, and drooling was a central component. This became the default plan, and I probably can’t undo it without duct-taping my mouth shut, and that makes me nervous. Sure as shit, some rapist would pick that night to pop by.

It’s not a minor amount, either. I lose a pound every night, and it’s a pound of drool. There’s enough DNA there to connect me to fifty years of felonious activity. If I die and enough people decide they miss Murrmurrs and want to bring me back, this is the first place they should look for cloning material. It won’t even be dry yet.