None Of My Birds Are In The Field Guide 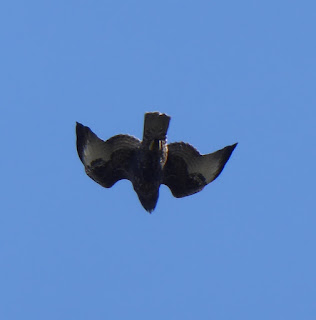 But I am a birder. That’s why I trip over sidewalk cracks and drive into the ditch at two miles an hour. Birds are always doing something more interesting than I am. But I can’t put two new things in my head at the same time without evicting something else. If I learn one bird, another one is going to fly out. It’s a problem. I’ve only got room in there for about thirty species, and female red-winged blackbirds are four of them.

But hawks. For Pete’s sake, I should know my local hawks. Birds of prey have distinct shapes. And it’s not like there are a million choices. If I see something hawkish, I should be able to pick it out from the small list I’m likely to see in this area. Shouldn’t I? There are all those helpful guide books with the hawk silhouettes all stretched out for you. This should be a snap.

Not, of course, if it is a Cooper’s hawk or a Sharp-Shinned hawk, which are functionally the same dang bird, and don’t believe anything a real birder tells you otherwise–take it from me, the shitty birder.

Today I saw a bald eagle. Pretty sure about that, since it’s common here and looks like an ironing board in the sky. Yup, they’re pretty much a big straight plank, and they hardly ever flap. This one was getting closer, close enough to zoom in on the white head and tail. I’d alerted my friend to it and we were eager to see it pass overhead.

But it didn’t have a white head or tail. My companion was disappointed. Oh, I said knowledgeably, it must be an immature bald eagle. He bought it, too, but the fact  is until it starts making fart noises and flicking boogers I wouldn’t bet the ranch on it.

Phases are little bird jokes. They can’t stay basic. They’ve got to have a juvenile phase and a second-year phase and a Libertarian phase before they’re all grown up.

I’ve got one more large hawk in the brain bank. And that is because it has distinctive white buns and glides a certain way and usually close to the ground. I totally know that bird. It’s a harrier. The problem is I can never remember “harrier” and always want to call it a goshawk. This leads real birders to think I don’t know what I’m talking about. It would be like if I identified a human as “one of those skinny little blond jobs, you know, a Samoan.” 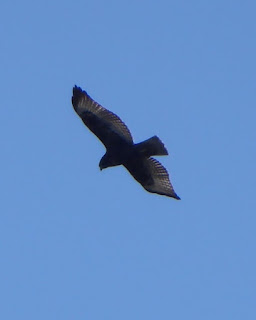 So I was very excited indeed to get a great view of a hawk overhead at Rocky Butte. Rocky Butte is one of our raggedy old municipal bonus volcanoes–we’ve got lots–and a nice high, windy spot to see hawks. It was an exceptionally windy day. The kind of day when you might spot a hawk and then watch it tip to one side and wheel off ten miles distant in three shakes of a rodent’s tail. And there is my hawk, hanging motionless right over my head in a friggin’ gale. It was amazing. He just sat there like he was posing for a painting and I was even able to locate him in my little point-and-shoot camera and get several sharp shots even though he was ten miles up. I am telling you people he didn’t move at all. And I thought: I don’t know who he is, but I have a photo of him now, and he has a fat head and fat short tail and real pointy wings, and that means I can look him the heck up. As soon as I get  home. For once in my life I will be able to look him the heck up.

I think the Lesser Antilles is missing a hawk.

Okay, there is no hawk shape in the book for my bird, who otherwise looks as crisp as if he belongs on a coat of arms. I realize now, and very much admire, that he has sculpted himself down to the very last wing finger into the precise scoopy shape that will allow a forty-mph wind to roil around him and hang him up motionless in the sky. He is remarkable, whoever he is. I have decided to call him a red-tailed hawk, aerodynamic-genius phase. A real birder will most assuredly chime in if he’s really a Samoan.

Incidentally, the Greater Antilles can be told from the Lesser Antilles by its more annoying voice and slightly longer bill.