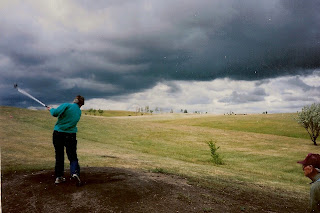 Our family was having a fine time at the old homestead. Balfour, North Dakota, population twenty, was a prime vacation destination when we were children, world-famous–we assumed–as the Home Of Grandma. Now we were adults and the hayloft and silage pit no longer held the same appeal. When Uncle Cliff noticed us passing the time chipping golf balls into a gopher hole, an activity that annoyed the grasshoppers no end, he suggested we go southeast a few miles for a real game.

The clubhouse at the Drake Golf club was closed so Elmer could get his hay in, but the course was wide, wide open. Cliff tucked two dollars per player into the little envelopes provided and slipped them into the slot like a church offering. He allowed as how we could use some of his clubs. He himself used only one club, homemade, with a massive leaden head and almost no loft at all. It had something of a Neanderthal aspect to it. And he also had a putter.

Dave selected a shiny, unmarked nine-iron from Cliff’s bag, confident it had 150 yards in it, and teed up, hair streaming behind him. The wind was coming straight out of the north, having originated somewhere in the Yukon and barreled south without resistance for a thousand prairie miles. This, in short, was a breeze with some pop to it. Dave gave his ball a good fat whack. He watched it sail into the distance as a small dot, hover, and then get larger and larger before everything went black. We figured he was bound to come to before the next hole.

Then Cliff and his friend Jake got down to business with their giant honking clubs. Cliff had a cranky hip, and Jake needed rocks in his pockets to stay earthbound, but they had the home field advantage. Either one of them could decapitate a column of prairie dogs with a single drive. Cliff’s and Jake’s balls skimmed over the fairway like stealth bombers and thunked onto the green. 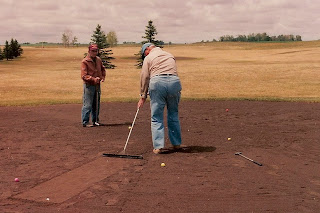 The second hole was a dogleg to the right. It was easy enough to make out the doglegs; they were defined by barbed wire, with the fairway distinguished from the rough by the relative absence of cow flop. I figured I could make the green on the diagonal. But that, I was informed promptly, was cheating. First you drive west, then you hit north to the pin. The trees at the Drake Golf Club were of the variety common to the rest of North Dakota: imaginary. You are expected to assume the trees.

About the greens. They were brown. Sand, in fact. They were perfectly circular. The hole was dead center. And what you do, at the Drake Golf Club, is you pack yourself a smooth little pathway into the sand, from the ball to the cup, and you putt. There’s a roller on a stick at every green for just that purpose. In the interest of moving things along, everyone uses the same pathway. It’s up to you and your conscience to eyeball the distance you landed from the cup and place your ball at the correct radius. Flip the roller over, and there’s a rake for tidying up your footprints when everyone has putted out. 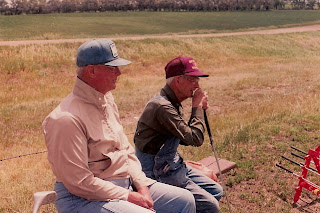 The Drake Golf Club has challenges rarely encountered on another course. I would not want to generalize about the sort of stuff a man needs to prevail. But let’s just note that the two players who had dry-farmed through the twentieth century and tallied up decades of North Dakota winters without indoor plumbing rolled to an easy victory. Still, I look forward to trying out the local bowling alley. The prairie dogs would be less of an issue, and I’m hoping the gutter goes right down the middle of the lane.