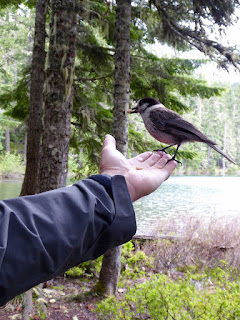 There’s more than one way of getting to the little lake we wanted to visit. We wanted to take the Pacific Crest Trail, famous for scenically containing Reese Witherspoon and her giant backpack in Wild. But the signage was unclear, and we accidentally took a parallel path. After a quarter mile, it dumped us onto a dirt road. In fact, we were on the famous Barlow Road, named after Famous Barlow, who did some honest work felling trees and widening deer trails to allow passage of a covered wagon, or a few hundred thousand, across a major volcano, and collecting a nice toll at a cinch point. Without a doubt, I presumed, this road would transition back into an attractive woodsy trail and meet up with our destination lake, which not only had a mountain view but was likely to harbor gray jays. We like birds that land on us. We’d brought an entire baggie of Cheerios just for them.

“Not to worry,” I told Dave, consulting my mental map–old people still have those–“this will end up in the same place if we just keep on it.” And so I fervently believed for about four miles. The road failed to adjourn to woodsiness and dust began associating with my pants. I was, in fact, dusty. Like the people on the Oregon Trail, I said to myself. 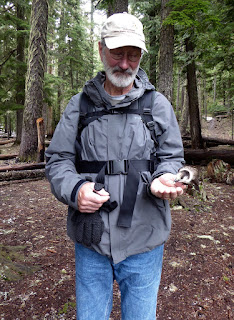 The Oregon Trail is local history and of much interest to those who trace their heritage to it, but I never got real interested. Seemed so bleak. All dust and slog and sizing up your companions as possible dinner material. You didn’t even get to ride in the wagon much. You were too busy fixing your wheel or pushing your oxen out of a rut or dividing a potato nine ways. And you probably started out starving or you wouldn’t have left in the first place.

Maybe most people looking for a home in America were driven as much by the need to escape something as the promise of a better future. My ancestors had hopes of finding a territory unscathed by religion, so they could put a bunch of theirs in it. You might be seasick in a tub of a boat or eating dust on the trail, but none of it was easy.

This Barlow Road was beginning to get on my nerves. There should have been a tie trail to the Pacific Crest at some point, but it kept not showing up. The dust made me want to push my bonnet back with a weary forearm and say Lawsa Mercy and Saints Alive. Then I got bit by a mosquito. I can go years between mosquito bites if I stick close to home. Then came the second mosquito. I can do math, and I was thinking geometric progression. What’s the point of already being in Oregon if we have to be on the Oregon Trail again? The road veered away from the direction I’d imagined the lake was. A fly showed up with a vicious gleam in its compound eye. Dave was squinting at me like he was wondering how I’d go with potatoes. I began to doubt that we were going to find the lake. Maybe this road was going somewhere else. 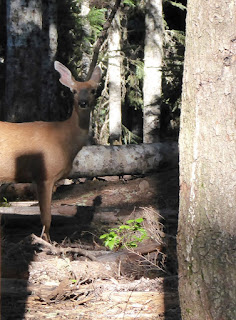 But maybe that’s not all bad, I thought, rationalizing another quarter mile. Some of the very nicest people I’ve ever known are from Kansas.

Oh wait. They’re from Kansas. Which means they got the hell out.

We turned back. We saw a deer. We had a beer. Someday soon, folks are going to be on the move again, likely without electricity or reliable food sources. But no point going pioneer until we have to.