Notes From A Lesser Birder

Somebody has to be the worst birder in the Birdathon van, and I for one am not afraid to step up.

I had hope that things would be a little different this time. I’ve made strides. I pick up a little more knowledge every season. A few years ago, I was astonished when our fearless leader, Sarah, pointed up to some frantic dots halfway to the moon and said “Vaux’s swifts.” Whuh? How? And yet now I not only recognize them by sight, but also by voice. (They sound like photons swapping secrets.) I was ready for Vaux’s swift.

And three years ago I thought she was making things up when she pointed out the Lesser Goldfinch, which, as it turns out, is totally a thing, and not a value judgment. In fact I now know it as one of the commonest birds in my yard, and I know its song, too. I was super ready for Lesser Goldfinch.

And, most significantly, I recently shaved a whole thirty seconds off my personal-best identification time for the female red-winged blackbird, a.k.a. that brown bird that’s the only other thing in a marsh full of real red-winged blackbirds. The first time I saw it, I paged through the entire field guide looking for it, finally determining that it was a previously undiscovered species, which should excite other birders, but it doesn’t. Anyway, I snapped off that ID in under a minute this time. I know–I’m amazed, too.

So off we went, and while the team was slurping coffee and easing into the day, I shot my arm out and bellowed AMERICAN CROW. Yeah, baby, in the bag! Mark it down and ink my initials next to it. I’m going to take a nap now. 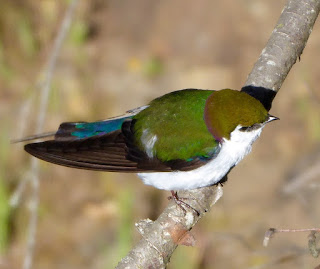 But I longed for more glory. At our first stop I bounded out and squinted into the fog, but one by one, my aces in the hole showed up in someone else’s hole, no offense. Anna’s hummingbird, bushtit, black-capped chickadee, even Wilson’s warbler, which I considered to be advanced–all of them quickly fell by the wayside. By the time I’ve got a bird in my binocs and a good read on it and am just about willing to go out on a limb with it, someone else has nabbed it right off its limb. Discouraged, I mentally reviewed easy and gigantic birds yet to be found, to no avail. Turkey vulture, red-tailed hawk, great blue heron, bald eagle, all of them landed in someone else’s eyeballs before they landed in mine.

Meanwhile our other fearless leader Max glances at a featureless horizon and says “pigeon guillemot” and, when I look distressed, kindly says “Here, I’ve got it in the scope for you,” but I still can’t make it out. The only thing holding Max back from identifying all the birds is the curvature of the earth.

I’ve come to understand that we’re not all possessed of the same talent. Sarah and Max and everyone else in the van have been able to sweep arcane details about birds into their brain pans and fry them up until they’re crisp and accessible. Most of my bird details get accidentally tossed off the cutting board and down the garbage disposal before I get the burner on. We can’t all have the same skills, and I’m freakin’ deadly at Bananagrams.

But there was glory yet in store for me. Per my usual method–see where everyone else is looking, and look somewhere else–I spotted something interesting and hopped up and down squeaking (“See something, say something”) until someone lumbered over with a spotting scope, found it in the sights, and identified it as a black-bellied plover, which I’d never heard of, in spite of which I went ahead and took credit for it. Loudly. That was my black-bellied plover, on account of how loud I was about it, and consequently they gave it to me and they can’t take it away from me. Boo-yah.

We never did see a lesser goldfinch.