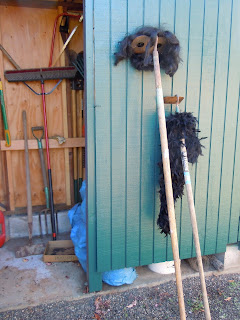 It is a sad fact of human nature that, when faced with a gathering threat, we dismiss or deny evidence of impending doom until it is blatantly obvious, when it might be too late to do anything about it. This was never more clear to me than when I opened up the Sunday paper and found not one but two articles about people who had been murdered by their riding lawn mowers. Wake up, America. Our garden tools have been conspiring against us for a long time.

I’d become aware of this menace years ago. It starts in all innocence with bulb dibbles and trowels, but soon enough a couple hoes are leaning up against the wall of the shed and the neighborhood goes all to hell. Pruners and loppers move in, followed by gangs of hacksaws and chainsaws, until eventually the shed is all blades and teeth. Leaf blowers inspire sensitive people to homicide. And yet no one seems willing to put two and two together and mount a defense. 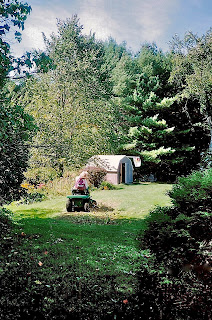 The only time I ever dared to operate a riding lawn mower was at my sister’s house in Maine. Something in the water there–lobster sweat, perhaps–has led all rural residents to blanket their considerable acreage in lawn, each abutting the neighbors’, stretching for miles in every direction. Even with a riding lawn mower, the task of mowing begins on a Monday and culminates on a Sunday, by which time it needs to be started anew. One member of the household is dispatched to deliver periodic sandwiches and no one rests until late fall. My sister’s mower had five speeds, and I planned to get familiar with only the first. The topography seemed certain to tip me over if I tried to get the speed up, and I am not a courageous soul. I rumbled off on my first pass trailed by a fleet of curious snails and promised to check back within the month.

Sadly, it was black fly season. We western Oregonians are unfamiliar with black fly season, but the learning curve was zippy as hell. Plugging along in first gear, I gaped in horror as tiny flies swarmed onto my face and chunked divots out of it and injected anti-clotting juices until my blood trickled freely in such a way as has not been seen since the Crown of Thorns incident. What fresh hell is this? I jammed the shift into second, then all the way up to fifth, before outrunning the flies. I got a little air time over the quince bush hummock and had the whole acre scalped in no time, bailing out at the backdoor and vaulting into the kitchen on the dismount. The mower was on a trajectory to return in a few weeks, by which time it would be mosquito season. Maine has its charms. But.

The woman in Oklahoma who was done in by her mower had six speeds on her machine. She had taken it out on the city streets after 10pm, hit a pothole and overturned. This is what happens when the voters care about nothing but tax cuts. I believe a person should be able to gun her lawn mower down the street after dark without worrying about potholes, but I’m a liberal. She was subsequently run over by her own mower, suffering a severe thatching, and then done in when the mower returned for the cross-cut.

The other mower incident was a murder-suicide. The unfortunate fellow perished when his mower burst into flames. Why did he not disembark, you ask? It’s so easy for us to second-guess after the fact. But when you’re just about done with your acreage and are making that final swing around the crape myrtle, your plastic flamingoes under one arm ready to re-stab into the ground, you always think you have a little more time before you catch fire.

Finishing that mowing job for the week is a powerful motivator. Let us never forget the case of the man in Mississippi whose feet caught fire when he was nearly done. He finished the job and was almost home free, jumped off, grabbed a mattock and began chopping the fire line to keep the flames from spreading to his torso. Bled out, poor guy.