Oh Brother, Why Art Thou? 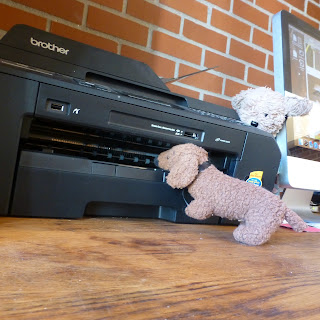 So suppose you kind-of sort-of invite somebody into your house, expecting him to act right, but he turns out to be a big slovenly dude that never so much as gets his own dirty dishes as far as the sink and he never once does anything you ask him to do and all he does is take up space and whine about shit and just about the time you’ve been able to pretend he’s not there he cuts loose with a big grotesque belch and a fart? That dude? He’s living here. And if you decide to give him a chance and ask him to do something really small like take out the garbage for once? And he clears his throat and makes some kind of noncommittal noise like he’s planning to get around to it sometime and you more or less give up on him but then right in the middle of the night he starts banging the garbage cans around and scaring the shit out of you, and even after all that when you check in the morning he’s still left half the garbage behind? Hate that dude.

We needed a new printer, we really did, but this one is all Boris when what we really wanted was something along the lines of a Timmy. Sucker is totally the size of an apartment refrigerator. We’ve parked it next to a sophisticated computer but it has learned no manners at all. Originally, it would print out pages if you asked nicely. It has a scan button that doesn’t do anything, and a fax button that does nothing but print out endless status reports on the faxes it won’t send. Generally, if you ask it nicely to print something, it makes a bunch of noise, sucks in a piece of paper, poops it partway out about a quarter-printed, and then squeals and clicks for a while before shutting down entirely. I’ve learned to leave it alone because every now and then, say, at midnight, when you’re concentrating on your writing, it will abruptly fire up again and spit out your page, and sometimes it’s even the whole page, and not just the quarter it had already printed.

A few weeks ago it refused, as usual, to print something, and informed me that I was out of black ink. I opened it up, replaced the black cartridge like a big girl, and hit “print,” and it said now I was out of yellow ink. I replaced the yellow cartridge, and then it said “did you replace the yellow?” and I said yes and it said “but I didn’t feel anything. Do it again.” So I did it again. And again. And again. And then I went to the Googles and found the most wonderful piece of advice. It involves black electrical tape–the same tape you use to fix your car’s check-engine light. And it worked. And then it said I was also out of cyan ink. And I taped that sucker too. And hit print, and it fired right up and started printing. Printed a half-page of something I’d wanted three weeks ago that no longer showed up in the queue, but it seemed like progress.

Then my sophisticated computer got super sludgy. I did a little research and determined that I needed more memory. Like, duh. So, with complete confidence, I went into the Mac store and asked the nice man to put in some memory. I explained it to him. I explained that I’d checked the Utilities Application and the Activity Monitor and the little pie-circle that should have a lot of green had NO green and was mostly yellow instead. “Let’s have a look,” he said, as though my logic were worthless, and sure enough, in his house, everything ran like a dream and my little pie-circle was three-quarters green. Huh.

“You’ve got plenty of memory,” he said, and asked me if I had any peripherals. Is that something that goes with onion dip? No, he said. Things that plug into the computer. Oh. Modem. Router. Solar panel monitor.

So I brought my resurrected computer home and plugged it in, and when I was set to stick in the last of the leftover USB cords, I noticed that it went to the printer after all. The bastard. I left it out. The computer is running fine.

But I have all the tools I need to fix the damn printer now. I have electrical tape. I have a splitting maul.