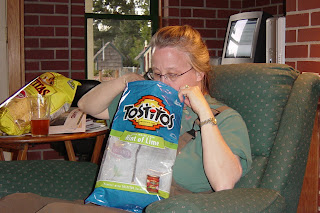 I don’t care to cook. If I’m left to my own devices, I’ll pin down a slice of bread and spread peanut butter on it, although that’s a lot of steps. Better yet is to scavenge under the plastic wrap in the fridge and nuke if necessary. Best of all is to find an open bag of something and start plucking things out until they’re gone. I’ve tried to do portion control on an open bag of chips before, even going so far as to remove some and re-clip the bag and put it away, and then I sit quietly and eat my allotment of chips. But it’s as if I’ve got some TV motivational speaker inside me, pacing the stage inside my brain with that annoying little headset and urging, if you can imagine it, you can be it! Only my speaker says if you can imagine it, you can probably waddle on over to the cupboard and eat it. I sit and eat my chips, and then I sit and ponder, and have a go at serenity, and then I say, I imagine there are some more chips left. No! I know there are some more chips left, because I re-clipped them myself, and I know just where I put them.

Then I sigh, and get the bag, and open it up, and have a few more. After a bit, it’s curiosity more than it is hunger. What is underneath this layer of chips here? Could it be yet more chips? Do you suppose they go all the way to the bottom? Only one way to find out.

Dave claims to like chips, and indeed it is he who buys them occasionally. Actually, he buys everything there is in the house to eat. But what he does is he puts some chips on a plate and makes himself a nice sandwich and then dresses it all up with a neat array of celery and carrots and pickles, and slices an apple, and chews it all slowly and chases it with a glass of skim milk, and then he clips the chips and puts them away. I ignore them for days sometimes, and then my motivational speaker reminds me about them, and that’s that. Two weeks later, Dave will go looking for his chips again, all puzzled, but I cannot be blamed for that kind of lack of attention.

Dave does all the cooking around here, and he’s darn good at it. Partly he wants to eat good food, and that’s the only way he’s going to get it, but partly I think he likes to be responsible for my upkeep. I’m like a little science project. He picked me up decades ago when I was little and cute and now he wants to see how long he can keep me alive. As a result I am somewhat overfed, but plied daily with vegetables and fruits. It’s all very balanced and nutritious, and if he didn’t serve me the same amount he serves himself, I’d probably be very well off. He’s a big tall man, and I am just the opposite, and it doesn’t look right, those two identical platefuls of dinner. People must talk. I’ve been prodding him to load up his plate a bit more.