I believe in tradition, even if I have to make one up every year, and so it is with solemn pride that I report this is the thirty-fifth year in a row I have screwed up the fudge-slathered fudge cake in a completely new way.

It’s never come out right, but it never comes out wrong the same way twice. I am not a baker. A baker understands things about temperature and chemistry and eggs. I have the reputation in my family as a baker on account of I do bake things, and I bake things because I like eating baked goods. In much the same way, Dave is a cook because he likes eating, um, food. We come as a set. It usually works out.

My baking works out mainly because it’s hard to throw flour and sugar and butter and cream together without getting something yummy out of it, even if you have to rename it.

Usually I mess up the fudge frosting on the fudge-slathered fudge cake. It either sets up too strenuously and slabs onto the cake like shingles, or stucco, or something other than smooth shiny slatherance; or, conversely, it doesn’t set up at all, and we have to chase it all over the counter with spoons. In all likelihood this is a matter of temperature and if I were an actual baker I would have a sense how hot to bile it and for how long, OR I would have a thermometer and precise instructions. The recipe doesn’t mention a thermometer. It merely suggests I cook it on medium low for about ten minutes. On the test kitchen’s stove, using the test kitchen’s saucepan. The home cook is on her own.

I messed up the frosting a little this time. Calls for six ounces of unsweetened chocolate, for which I substituted the three ounces I actually had on hand, two ounces of semi-sweet chocolate chips, and a pale, desiccated old ounce I scrounged from my neighbor, because it’s not really Thanksgiving unless you’re missing a key ingredient and the stores are all closed. 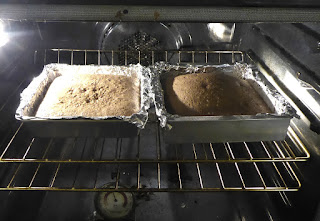 I don’t usually mess up the cake. At least, not any more than it’s been messed up every year. It involves whipped-up egg whites and whipped-up egg yolks. You’re supposed to fold the egg whites into the rest of the cake batter. “Folding” egg whites is one of those baker jokes. Real bakers laugh themselves silly over putting that instruction into a recipe, because it is not possible to mix fluffy egg whites into chocolate and ground nuts and keep any loft in them at all. There’s really no point. Nevertheless, I try for it every year. The two cake layers bake up fluffy and then swoon into sad little cratered crackers as they cool.

This year, however, I dropped a bit of egg yolk into the egg whites and couldn’t persuade it out, so I just went ahead and tried to whip it all into Soft Peaks. I did not achieve Soft Peaks. I achieved an apathetic foam floating on a sea of snot. 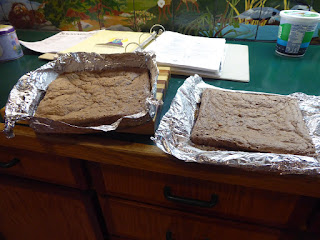 Hell with it, I said. It’s not like this cake ever stays fluffy anyway. I mashed all the egg portions together with the nuts and chocolate and poured the whole mess into the pans, and I will be dogged if the cake didn’t turn out better than it ever had. It’s not fluffy, of course, but this time it’s not actually concave.

Well! The frosting turned out perfect too. Without any doubt, this was the most successful fudge-slathered fudge cake in 35 years. Somewhere, there’s a cabal of bakers cackling their fannies off thinking of how much pointless bullshit they get people to do. I should’ve known right off the bat when the first instruction was “grease two pans and then line with tin foil.” Because everyone knows how much tin foil loves to stick to pans! Very funny, baker cabal.

Next year I’m going to throw all the ingredients at once into a big bowl and chuck eggs into it from across the room, fish out the shell fragments, and mix. It’ll be fine.