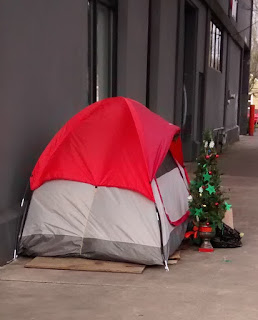 It was a short video. A person wrapped in a blanket was curled up on the ground and a man in a business suit–let’s call him Boots–gave him a sharp kick as he walked by. The characters as costumed were a little too dead-on for good fiction, but this was not fiction. It was horrible.

So was the second commenter in the thread. “While I would never do such a thing,” he began ominously, “we should realize that a lot of people in this country are pretty fed up with the homeless camps and slackers with their filth and feces and…” It went on. It became clear that the commenter would dearly love to kick the man too, but would settle for fantasizing about it. 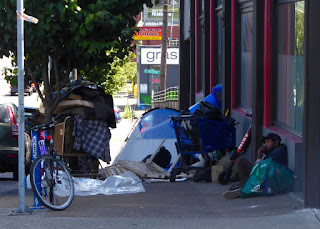 I also am appalled at the filth and feces and campsites and begging and everything else that we’re seeing so much more of these days. I hate it. I’d rather it weren’t there. What I can’t fathom is how a person can walk by these tragedies and not ponder that old saw about the grace of God, who is notoriously arbitrary with his blessings. How does someone come to this circumstance?

Boots and his apologists do not, apparently, give it much thought. They do not like the way this human refuse looks or makes them feel, and have already concluded that these people are fundamentally different from them. Maybe not quite human at all. In their charitable moments, they might suppose they’re mentally ill, and hope someone will scoop them up and stash them somewhere. Otherwise, it’s their fault. 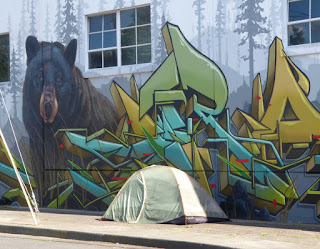 They are not like us. Because we are moral, principled, and hard-working.

One of the problems with imagining the worst of our fellow humans who are homeless is that we then have to believe something happened to suddenly make a huge number of people shiftless or evil, because we haven’t seen poverty this widespread in our lifetimes. Assuming that the percentage of mentally ill people remains steady over time, what could have turned so many people so wretched so fast?

Here’s where we really get creative. It must be because there’s been a moral breakdown since the advent of birth control. Or since we took God out of our schools. Or since the liberals quit teaching their children the difference between right and wrong. Or maybe God is punishing us for gay rights and abortion. Or maybe this is all part of the plan to hurry along the second coming. Something catastrophic, surely, has happened to our society, something we righteous folk had the good sense and fortitude to avoid. One thing we know: that could never be us down there on that sidewalk. 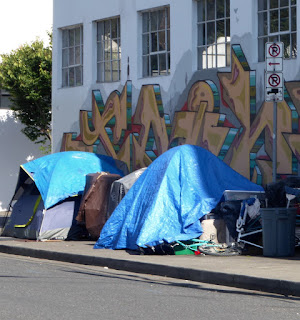 After all, there’s no excuse for it, when the economy is doing so well! Unemployment is way down. The market is way up.

I have to say this in a whisper, because the cheerleaders for the current regime spook so easily: all this shit you deplore is a really big sign the economy is not doing well at all. Because you’re right: we didn’t see this stuff when we were growing up. The economy first started picking the big winners and big losers when Reagan came into power, and cut regulations, and cut taxes on the rich, and privatized for profit what had been in the public trust; and the gap between those who have everything and those who have nothing has widened ever since. 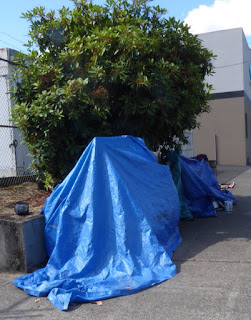 But we the people are the government, here. We can design any economy we want. We can structure our tax system so we reduce or eliminate poverty and strengthen the middle class. Or we can daydream that we’ll all be better off if there were no constraints on capitalism, no rules to make sure the least among us could live in dignity, no regulation to preserve our environment and climate. We could make sure that a person working full-time can afford to shelter and feed herself, however modestly, or we could continue to blame hard-working poor people for failing to find better jobs. Right now, we want someone mopping our floors, and cooking our burgers, and picking our lettuce, but we don’t think they should be able to support themselves doing it. We really don’t value work at all. We value money, stacked high, however obtained.

Extreme capitalism, dedicated solely to profit for shareholders, will always produce more billionaires and more people we want to kick. Always. It’s up to us to insist on a better world. If you’re offended by beggars and camps and filth everywhere you look, quit voting for the billionaire party. And if you don’t want immigrants and refugees either, quit voting for the warmongers and climate destroyers. It’s a direct damn line.