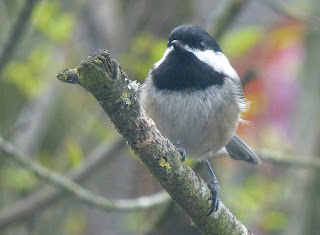 I’m as surprised as anybody. Apparently I am going to write about my chickadees again, just as I have every spring since I started this Murrmurrs enterprise, in spite of the fact that I have been observing chickadees closely for all that time and have nothing new to report. There’s never anything new. I still can’t tell them apart. I don’t know if Ricky and Lucy are back again or if it’s their grandchildren. I don’t know who’s egging and who’s fertilizing. I don’t know if they know.

We (Dave) took the chickadee house down for the winter and hauled out the old mattress and swabbed the decks and a couple weeks ago Dave began to get antsy about getting it back out there in time for nesting season. I didn’t think they really started nesting until later in April, but we (Dave) put it back out there and fifteen minutes later a couple stopped by to have a look. And they looked ready to make an offer.

The birdhouse in question is mounted on a pole eighteen inches from the window in my writing room. The writing room is a place where I sit down and things either come out or they don’t, much like another room in this house. What the writing process looks like, to the casual spectator, is a nearly motionless woman sitting in front of a computer with her head cranked to the side to stare out the window. The charitable observer might assume that she is staring into the middle distance waiting for her muse to strike, but she is not. She is staring at chickadees and not writing at all. 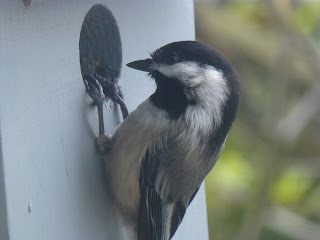 This writer does not employ a muse. Perhaps the chickadees are your muse, I’ve heard, and that is an adorable possibility, but there are muses, and then there are muses. Mine would be the sort that says “lighten up, dude, you don’t have to get that done today–what say we go out and get hammered,” which is a fun, if not useful, muse. It’s all fine with me. I’m not the kind of person who thinks watching birds is a waste of time. But for all intents and purposes, I do not have a muse, nor am I aware of any angels working on my behalf. If I do have angels, they are shootin’ the angel breeze with each other and shrugging and saying you’re on your own, kid. (As long as we’re on the subject of spiritual squatters, I would like to take this opportunity to deny emphatically that I’ve got the devil in me, despite what you may have heard. Those noises are coming from a perfectly natural bacterial process.) I’m getting through life without any supernatural aid that I know of, but I do have a matched set of spring chickadees I can count on.

And I do mean matched. This is the year I am bound and determined to observe them so strenuously that I will be able to tell them apart. I’ve started researching on the internet, but I’m not sure I can count on everything I read. So far I’ve learned that chickadees eat seeds (check), insects (check), and skunk

fat (whuh?), which I think would annoy the skunk, and who does that more than once? But I will soldier on. We here at Murrmurrs are very concerned about the rights of women and gays, extinction, 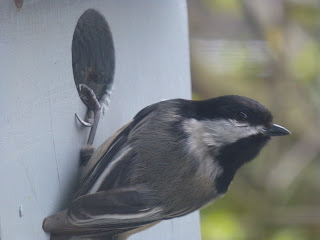 poop, war, and the fate of the planet, and we assume you are too. But if you would rather hear about my chickadees, stay tuned.

Because it’s nesting season, and there’s a lot going on right now in a sky near you. There’s singing and dancing and fluffing and puffing and casing and chasing and if you haven’t noticed any of it, it’s time to pull your head out. Up. I meant Up.