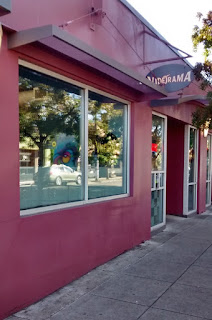 I guess it had to happen sooner or later, and this is way, way later than you’d think. Videorama is a little neighborhood store that rented DVDs or CDs or PBJs or whatever they were–the things you jam into one of your boxes with all the cords hanging out of them and a movie would appear on your TV as long as you could figure out which of the seventeen remotes you don’t dare throw out is the right one. It was just our speed. We had a routine. We’d decide to watch Breaking Bad and we’d go down the block and fetch the beginning of Season One, with five days on the rental, and then we’d go back six days later and pay the late fee. We’re not really set up for binge watching. Dave falls asleep twenty minutes after the TV comes on and I have to keep monitoring him to see where I’m going to have to back it up to the next night. But it worked for us. It got us out on a rainy night for a little walk and the ice cream store was right there on the way back.

We weren’t the only ones in there, either. There’d always be a half dozen old farts shuffling through the aisles and, remarkably, two or three people behind the counter. I loved those kids. They’d help out when we finally discovered we were missing Breaking Bad episodes. It took us a while because we were accustomed to being confused about the plot and, after all, something horrible was always happening to the characters, so it looked right. Turned out the manufacturers would put out discs and call them “Complete Season One” before half the episodes had been produced, and we’d think we had the whole thing. So we got in the habit of coming in with our disc, handing it to the counter kid, paying our late fee, and he’d find us the correct new one. 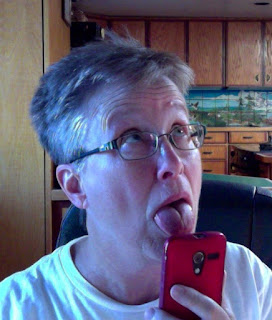 The thing is, we figured we were just about the only people left who rented movies. Everyone else had gone over to some other system. For years people have been getting movies through their mail slots and then later they were sucking them straight out of the air and into their TVs. I looked into it, once. I would have needed a new box of some sort, and sure, I could probably find room for it on top of the old Tivo or the eight-track player, but accumulating another new box with wires depressed me in a way that walking in the rain to Videorama didn’t. Especially with the ice cream store right there on the way back.

Now you don’t need the new box as long as you have a new TV. I still wasn’t sure how any of it worked. It wouldn’t have surprised me in the least to discover that people were now summoning movies directly to their retinas by licking their phones. “It’s easy,” they’d say, “and if you spring for the laser treatment one time to get the chip implant, you can just pay for it by blinking.” I’m not interested. My retinas definitely do not support High-Definition and I’d probably scrape the shows off with my monocle anyway.

But our nephew keeps dropping off appliances as he upgrades, and so we found ourselves in possession  of a new TV, and we hung towels on it and such, and seven months later a young friend plugged it in for us, and showed us how to suck movies out of the air with it, and it’s all working very nicely. But I can’t help but feel that the little Netflix button on the new remote was what drove the last nail into the Videorama coffin, and I’m sorry.