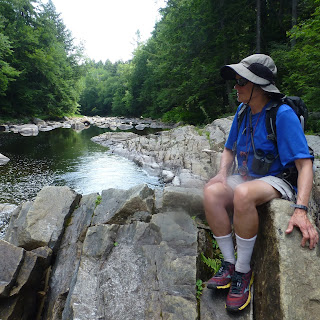 I headed off with a somewhat smaller group for a hike to a waterfall. Anyone says “hike” and I’m usually in. For a while it didn’t look like this hike was going to involve any actual forward movement. You get an astrophysicist and a geologist with a GPS device and they’ll hunch over in the middle of an obvious trail for hours staring at their whizbangery. I’m technologically backward, but evidently there exists a little square box that can tell you where you are with CIA proficiency. “There should be a large, striated metamorphic boulder eight feet to our right,” they’ll say, hunched, “and right now we should be directly under a suspended spider visible from space.” They look up.

Already this is a lot different from the old Hostel Club. We didn’t really care all that much if we got lost, because we were young and unfamiliar with mortality. There was never a guarantee Lynn’s VW bus wouldn’t strand us on the side of the road, we had no cell phones or cash machines, and if we did undertake too many expeditions in a row without getting lost, we’d try spelunking. We’d drop ourselves into a narrow hole in the ground on a rope and scrabble about in the mud and the dark like salamanders until even J. Edgar Hoover gave up looking for us. We always assumed at least one of us knew the way back to the rope, and as long as there was still a prospect of descending on the nearest Howard Johnson’s on the way home like the Attack of the Mud People, we were happy.

But there’s no getting away from the modern ways, which are undeniably cool. Still, it wasn’t technology that saved the day for me. It was Karen. And she isn’t even an original Hostel Clubber. She married in.

We left Bill at a water hole with his fly rod and took our noisy selves further up the stream in search of the mythical waterfall, which was exactly where, in the opinion of John’s GPS, it was supposed to be. Three of us, not including your correspondent, plunged into the pool below the falls, while your correspondent examined the falls with just a little disappointment. This was puny by Oregon standards. There were rocks and water and a smattering of gravity, but not a lot of fuss to it. But Karen is a marine biologist, which means she is an avid appreciator of life in all its speckled, gelatinous, stridulating, or wriggly majesty, and she and I were soon flipping rocks in the stream and scoring frogs and crawdads and a toad and little tiny insect larvae and she whipped out her magnifying glass and revealed yet smaller (but still enthusiastic) forms of life. She found me a freshwater sponge. I didn’t even know there was such a thing as a freshwater sponge! You can tell them from the marine sponges by the scrubby pad on one side. And then. And then! 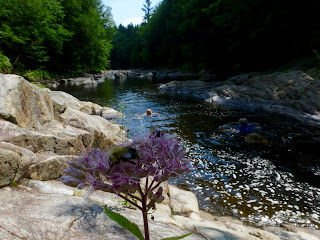 Fishies! But not normal fishies. Fishies with zest and ambition and piscatory derring-do! Fish smaller than my little finger were galloping straight up the wet rocks and bounding into the cascades, everywhere we looked. They bunched up in pools the size of a bicycle helmet to get a good running jump and they flipped themselves into the miniature torrent and zipped and squiddled their way upward, ever upward. Diminutive bears waited at the top of the falls with their mouths open. Itty bitty videographers from National Geographic stood off to one side. Somewhere a band of tiny trumpeters was playing the theme from Rocky. Karen and I crunched down as small as we could and cheered. Go, tiny fish, go! Go, tiny fish, go!

We have two biology degrees between us, hers a working model and mine vestigial, and we have no idea what the hell they were doing. They couldn’t have been old enough to spawn. Maybe they were little kid fishes playing “bet you can’t” and “watch this.” It was an honor to observe them, and hard to leave them. But we’d promised Bill we’d meet him back at his fishing hole, and there we found him, troutless and a bit worse for wear. He’d slipped on the rocks and fallen in, twice, to the detriment of several body parts he wasn’t done with yet. John and Karen and Morris had plunged in on purpose. I was the only one high and dry.

Here’s a video of our heroic fishies. Look closely! A couple of them make mighty leaps at the very end.