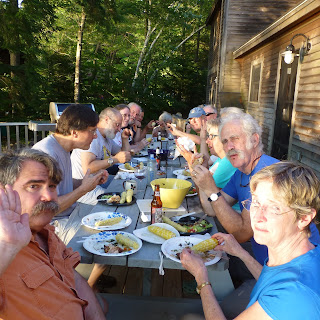 We’re well provisioned, I’ll say that. Penny is in charge, and we’re glad of it. It was Penny who budgeted and shopped for our epic seven-day bicycle tour of Amish country, back in 1968, coming in at twenty bucks a head. She has a steely determination and fiscal ferocity matched only by her coupon collection, and if we eat any more food, the grocery chains are going to be sending us money to stay away. We’re in good hands.

As for activities, it’s not like we all have to do the same thing. We have options. There’s talk of an excursion to the Adirondack Museum. There are bicycles and canoes. There is a lake to hang out in. And there’s rafting. Rafting: why not? What could be better for a girl like me, who is terrified of water, than to rocket down a river without a seat belt, or a personal relationship with the Almighty, in the company of friends who promise to pluck me out of the drink as long as I don’t bounce out of reach? Sign me up.

Problem. The first thing on the waiver was something about death and dismemberment. The last thing on the waiver was something about one’s heirs and assigns. I’d blacked out on the stuff in between. Janice and I traded wretched looks. She looked every so slightly worse, actually, because she had managed to locate the only two working black flies in the area with her face. We embraced, exchanged last words, and trudged into the cattle car. School bus, I mean.

At the put-in, our guide, Madd Dog, eased us into a shallow eddy to practice rowing and piling into the belly of the raft for emergencies and following orders and not stabbing each other in the head with our paddles, until we were a smooth, well-oiled machine. And then we shot into the mainstream and pinballed down the Hudson River like a spastic, panicked centipede, oars clacking violently, our little arthropod legs going north and south at once.

Madd Dog looked over his team with the bleak serenity of one accustomed to disappointment. He had the steering wheel but no brakes and apparently no drive train, but he knew his river. Our crew had a good forty years on every other crew on the river, which meant we didn’t have as long to live, but might have better lawyers. He piloted us around all of the more obvious Gyres of Doom and managed to keep our lungs undampened.

Seventeen miles later, we sailed into port on silky waters, oars a model of synchronicity. The Trilobite had landed. We were ready to go home and regale our museum-going counterparts with smug composure, and as long as nobody checked for hematomas, we could pull it off. What happens on the Hudson River stays on the Hudson River. If my fingernail and the skin from my knee should happen to wash up on shore, though, I’d like them back.