One Hundred Cheers Of Jollitude 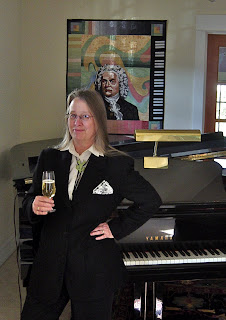 Grab yourself a little piece of that cake over there, and make sure you have a glass of champagne. This here is my 100th post in Murrmurrs! No one is surpriseder than I am. When I started, I would have sworn I didn’t have a hundred ideas, total, lifetime. But here we are. My head is jammed full of stuff. As Dave likes to point out, it’s really dense in there.

You should have a purpose in mind when starting a blog: to educate, to chronicle, perhaps to provoke. My goal is to cause a leakage of bodily fluids in my readership. If I can make you have to change your underwear or wipe something off your screen, I’m happy. That’s where the cake and champagne come in. Everything reminds me of something else, and there’s usually no more than one or two degrees of separation before you hit funny. So I think of something, and that makes me think of something else, and that makes me think of something else, and if I can remember what I started with–by no means a sure thing–why, I’m off and running.
I wrote my first post on December 27th, 2008, and my second a day later, and the Blogger template made it look real purty so I went ahead and told both of my friends, and then I settled into a comfortable twice-a-week schedule. Now, there’s a lot of information out there about having a successful blog, and one thing everyone agrees on is that you should post at least three times a week. Call me a crank, but my thought is that no one will look at a blog three or more times a week unless it’s entertaining. I searched my heart and decided I could only be funny twice a week, and you don’t even want to be around me those other days.
Actually, I’m fun to be around slightly more often than twice a week. I began to accumulate blog posts which I confine to a little kennel on my computer. I have a pack of at least fifteen of them ready to let loose. At any given time a few will be under construction, and about three of them will be told to go to their crates until they funny up a little more. I worry when I put out a post that I think is pretty funny but not very funny. I always think: well, there goes my audience. Same thing applies when I put in one with a political or religious theme, which I seem unable to prevent myself from doing. “That one will drive people away,” I fret, but then I think: No. My readers are smart and delightful and agree with me on every last thing. Right? Right? 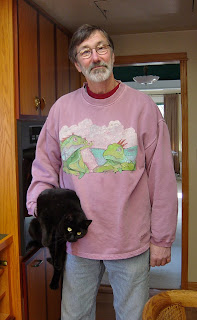 But even though I have a group of posts just yipping to be let out, I decided not to increase the output to three times a week. That would be more pressure than a retired and, frankly, slothful person should be expected to bear. Especially one who isn’t getting paid.
That getting-paid thing has been an eye-opener. I started the blog to develop an audience, which you need before anyone will publish your book. I’d still like to get a book published, but I discovered that having an audience was most of what I wanted. It’s almost as if my readers are the people standing in the forest with their ears peeled, and I’m the tree that falls down. If they weren’t there, would I make a sound? I’m not at all sure that I would. So you people are drawing out my work, and that energizes me and makes me very happy, for which I thank you all.
Wherever you came from. I haven’t hit the big time, but I do have more readers than I have friends, so something’s going on. Now, a person could conceivably trip over my site just by Googling the right thing. For instance, if you type in “ferret snot,” I’m right there in the number-one position out of 400,000 hits. (Dave Barry is number three, people.) Most of my readers live in Oregon, which tells me they’re my friends or their friends. But a goodly percentage, when I dig into it, are birders. This means my friend Julie Zickefoose sent them. Which brings up another thing:
I didn’t know much about the so-called blogosphere before I began bobbing around in it. But here’s one thing I found out: it’s got friends. I now have friends I’ve never met, but friends they are. My head says “those are just names on a screen,” but my heart, a much better judge of such things, has already brought over a bottle of wine, checked out the fridge, and curled up under an afghan on the sofa. It’s the real thing. 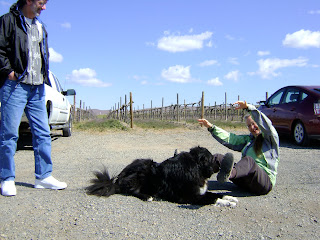 Regular readers will have learned a lot about me. I’m muddle-headed, I tip over a lot, and I live with a cat and a large man, both of whom are total goofs. I like beer and flowers and salamanders, I’m a big chubby liberal, and I’m probably going to hell. That’s me in a nutshell.
I always thought I’d be a writer. I wrote a lot of bad poetry in school and some exceptionally bad fiction. After that, I didn’t write much of anything for over thirty years. They say that you need to live a little to have something to write about, and I think that’s true. What did thirty years of living prepare me to write about? Poop.
I checked back, and at least eighteen of my posts are either about poop or mention poop (in passing). I’ve written about lizard poop, and bat poop, and raccoon poop, and sandhill crane poop. Possum poop, people poop and the poop of the potoroo. Hamster doots. Quark shit, for crap’s sakes. I don’t know what this says about me, but I will report that my poop posts get a lot of commentary. However, the post that got the most comments of all was about erections. That says a lot about you. 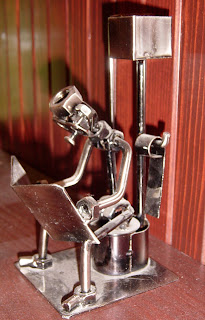 Here’s a little primer about comments, for those of you not in the know. You can click on the little “comments” line at the end of every post and put in a comment. It will ask you how you want to be known, and you can be anonymous. But if you wanted to create a Google account, and have your name and picture and everything right there, I’m here to tell you that it’s free and easy and no one seems to hound you about anything afterwards, so go for it. Also, if you want to send a particular post to somebody, you can click on “share this.” I won’t stop you. If you want to email all your friends about Murrmurrs, I will encourage you while blushing at the same time, which is all the multitasking I can handle without tipping over. If you want to put a link to Murrmurrs on your Facebook page, I will lick your feet and bake cookies.
Thank you all for coming. In the spirit of the season, Post #101 will be about poop.
Here are a few of my favorite posts, excavated from the archives, which you can find at the left:
We The People
Loved Ones, With A Side Of Lefse
Requiem For A Biology Degree
Speaking Phlegmish
By Murr Brewster|2021-11-09T21:31:42-08:00December 9, 2009|Uncategorized|31 Comments