One Way To Screw 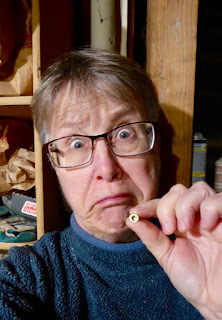 When it comes to screwing, I like to stick with what works. The problem is there are way too many ways to do it.

It’s just another sign I should have been born in the 19th century when life was simple and no one wore underpants and everybody screwed the same way. I’ve said it before. Too many choices do not make a person happier. Too many choices just make you feel like an idiot.

You start out with God’s own screw, the slot-head, and  it makes perfect sense. No need to get all fancy. Then you run into your first Phillips screw and everything you thought you knew about the world flies out the window, but you adjust. You even get to like it. Your screwdriver doesn’t slide around. You feel super competent. “What have we here?” you might say, calmly. “Why, it’s a Phillips-head screw. I shall fetch my Phillips screwdriver.” It’s like you’re in a special club.

But recently I needed a screw for something and I looked around the basement, which Dave has stocked with all sorts of metallic mystery items, and all I could find were screws that weren’t slotted or Phillips, but had little asterisks in them instead, and I couldn’t think of any reason that should be unless someone was deliberately trying to mess with me. Trick screws. There you are in the 19th century and you go to plink away at your parlor piano, and all of a sudden it won’t work without the special mittens you don’t have any of. Why? Why? 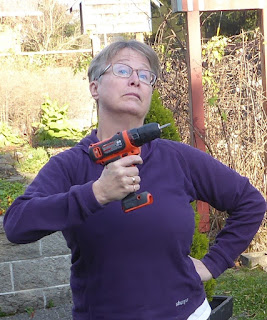 Righty tighty, lefty loosey. So far, at least, that’s still universal. Those of us with sieves for brain-pans need a mnemonic like this. I use it every single time. Say I’m trying to screw in a screw and it won’t bite: I wonder if I’m turning it correctly. Maybe it’s backwards when I’m upside down, which I arguably am, from the standpoint of people in the contrary hemisphere. And because I have no ability to manipulate objects spatially in my head (this is why I still don’t understand the phases of the moon), I have to actually act it out. I make a twiddly motion with my finger as though I am turning a screw and then stick my head under my hand and look up, and sure enough the screw is going left when I’m going right, so no wonder the sucker won’t budge. It’s just one of those things I’m not meant to understand, like how somewhere in the world it’s yesterday, or like how toilets at the equator are too confused to flush. Righty tighty, I repeat to myself with conviction, and the screw still won’t move, and then I start looking for nails and glue. Screw screws.

There have been screws since the Middle Ages. No one ever found any screwdrivers, but their existence was inferred from the presence of the screws. We still don’t know where all the screwdrivers are. But the screws were simple slots.

I complain to Dave about his asterisk screws. There is bitterness in my voice.

Calm down. It’s just a Torx screw. You need a different bit.


Where does this end?

There are hexagons and clutches and Robertson Square Sockets and Allens and fluted sockets and Frearsons and Pozidrivs and Bristol Splines and Tri-Wings and Thunderbolt Grease-Slappers and this, all of this, is clearly the work of hostile forces indifferent to my self-esteem or my desire to become a handy-citizen.

Calm down now. It’s not always about you. Each of these has a perfectly good reason for existing.

Like this one can be engaged at more frequent angles by the driver bit, and that one allows more torque to be applied before the screw cams out.


I suspect I’m being deliberately brainswoggled but after a while I’m able to accept that it is implausible there is a world-wide conspiracy to target my insecurities, and eventually I’ve recovered sufficiently to attempt to fix the coffeemaker. If it can’t make coffee, it’s just another big piece of plastic that’s going to end up in an albatross some day. Fortunately, according to the Googles, it’s a simple fix. The water tube needs to be cleaned out. You access it from the bottom. There will be two screws to undo and then it’s all presto reamo.


The two screws are slotted-spanner tamper proof. We do not have a screwdriver to do a simple fix on a $20 coffeemaker. No one does. The manufacturers of coffee makers hate me, and also albatrosses.  Our screwdrivers are good for nothing.