Oops! Totally Did Not Mean For That To Happen.

Critics of the proposition believe the labels might lead consumers to reject GMO products without having any understanding of their environmental and economic benefits. There is something to this. People might indeed veer away from the stuff even if it is completely safe. It is true that many people react viscerally rather than investigating. For instance, I automatically, without further review, discount any proposition made by a Republican, but it does not follow that all Republicans are unworthy of support. No. They are unworthy of support because they are short-sighted, profligate, womb-invading planet pirates with cash-encrusted pockets the size of entire countries.

So what is genetic engineering? It is the deliberate manipulation of a living genome by the insertion or deletion of a gene. Deletions are dicey: the sucker is still in the hard drive somewhere and ignorance of this fact will dog you all the way to divorce court. But usually genes are inserted instead, and usually across species. Most often a bacterial gene is inserted into plant DNA, but it could totally be a squid or something. The gene can be inserted by attaching it to a virus and sending it on what amounts to a guerrilla mission, or tiny little particles can be fired into their targets with something called a “gene gun.”

This process has resulted in plants that grow their own insecticides or are impervious to our own herbicides, or–in a breakthrough for the fossil-fuel industry–tomatoes that remain sullen and leathery and can be transported over huge distances until they arrive at their destination markets to “ripen,” which is the industry term for turning reddish. 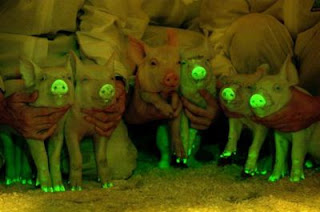 Animals too have had their genomes twiddled with. Using a “gene howitzer,” a goat has been engineered to produce incredibly strong spider silk in her milk, which is suitable for body armor and other military uses; pigs have been grown that glow green in the dark. 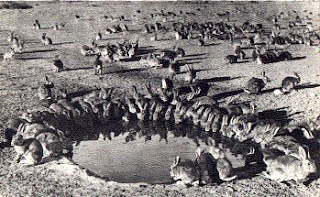 Ask anyone who has ever suffered that common nightmare about the roving band of bullet-proof goats wearing night-vision hoggles: this has the law of unintended consequences written all over it. It should sound familiar. Settlers in Australia thought they were bringing in a tasty touch of home with their rabbits, and now the entire country’s topsoil has been replaced by bunny fur. We’re no good at this.

It isn’t that we can’t aspire to greatness. If the gene that persuades songbird chicks to poop in their own little transportable baggies could be shot into urban dogs, the world would be a better place. Likewise might we be better off if the pig-snout development gene could be inserted into mosquitoes so that they grow blunt proboscises, and are forced to queue up at the Red Cross for charity blood boxes. But things get away from us. The concentration of logy mosquitoes might then lead to localized populations of rotund chickadees that can barely get off the ground and threaten the eyesight of small urban dogs. The birdhouse industry will falter during a retooling phase and new markets will spring up to produce designer chickadee deflectors for pugs. It’s hard to predict, or control.

If you look around at nature, you’ll find that everything is pretty much the way it’s supposed to be. That’s not so much because any particular deity wants it this way. It’s that if it were supposed to be another way, it would be. Which is not to say things remain static. Stuff happens. Little stuff, big stuff. Lightning strikes a tree and creates new housing opportunities. Rocks fall out of the sky and all the dinosaurs pack it in. Life is opportunistic. If you pull a peg out of the wall, something’s going to happen. Either something will burrow into the hole and lay eggs, or the wall will come down on top of you. 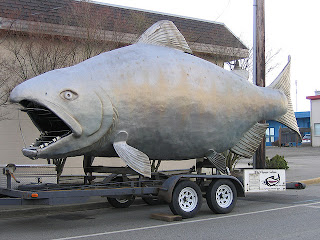 So without doing a lot of research, I am on the distrustful side of the genetic engineering development. We’ve done nothing but tinker since we crept out of the gorge and danced on the savannah. And I don’t think our record of so-called mastery is very good.

But I am excited about the possible introduction this year of a fast-growing salmon. Throw in a baguette the size of a missile and Jesus will be on board with it, too. I know just where they’ll put it. Right off the Pacific into the mighty Columbia, which I can see from my house. Any lesser river and the poor bugger will scrape his sides on the banks.