A Pain In The Neck 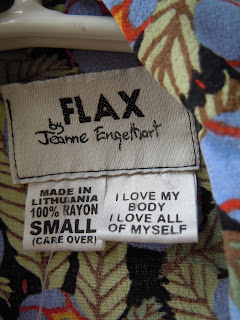 You know how someone can be really attractive, but then you realize they think they are too, and it turns you off? Happened that way with the Flax shirts. I’m in the store and all the prettiest shirts were from Flax Design. I checked the tags. That’s when I saw the extra tag on each one, and boy, were they into themselves. “I AM BEAUTIFUL JUST THE WAY I AM,” said one. “I LOVE MY BODY, I LOVE ALL OF MYSELF,” said another. That’s a lot of yapping going on for something you just planned to throw on for the sake of decency. Like there isn’t enough self-promotion going on in the world.

First thing I do when I get a shirt, anyway, is to rip the tag out of the neck. It’s just a little kernel of irksomeness. I also cannot tolerate a crumb in my sheets, which will keep me awake until I evict it. I’ve been referred to more than once in this house as a “princess,” without any of the finer connotations. One could say I don’t show any signs of having been born of pioneer stock, but I’d be fine with wrangling an obstreperous mule or keeping rattlesnakes off the chilluns. Ain’t none of them dames had to contend with tags inside their homespun. 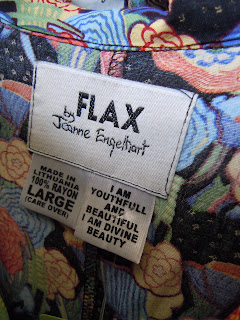 A little information is all well and good. Mostly we do know how to wash our garments, and mostly we can tell what size they are, and only certain kinds of people care to know who made them.

There is such a thing as printing the information right on the fabric so as to avoid tags at all. That is a big selling point for the underwear Michael Jordan used to wear in those ads that kept me watching sports on TV. I think he was hawking the underwear. I would have bought a fur-lined battery-operated set of Croatian encyclopedias from Michael Jordan if he came to the door in his underwear. 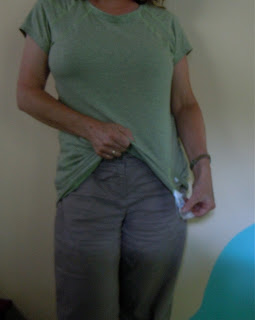 I got a shirt once that had a tag made of burlap, folded over, with extra bits stitched onto it in horsehair. That one had to be nuked out. It was a flannel shirt, and must have been going for a rugged theme. Why stop there? Why not stitch on a little baggie of wasps? My recent purchases from Columbia Sportswear are more humane. There’s something printed on the neck fabric so you can tell front from back, but the tags are on the side seam toward the bottom. They’re huge, but they’re made out of butterfly breath. I can’t feel them at all. Flax Designs should be moving in that direction. If they add just a little length to the tag, they could swing it around to the front and tack it to the shoulder like a pageant queen sash. “Miss Overweening Self-Confidence,” it could say. “At Least My Shirt Likes Me,” it means. 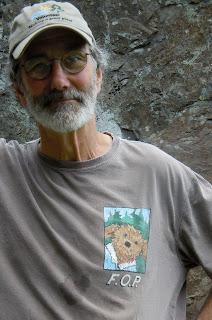 I am at a loss to understand what kind of person who needs a little boost of self-esteem could actually get it from her shirt tag. It’s pathetic. I have my down days, but I’m not going to respond to a pep talk from my clothes. Dave’s “Friend Of Pootie” shirt always cheers me up, but that’s different.

Any shirt I buy might as well have a tag that says “HELP ME! I’M BEING ATTACKED BY A SEAM RIPPER!” It’s out of there–I don’t care if it says Dolce and Gabbana. Which it won’t.