Parasites In The House 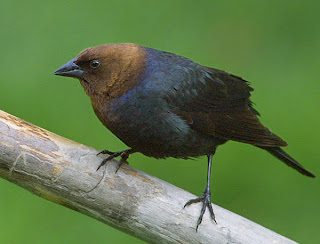 Birds work their fannies off. That’s why you hardly ever see a proper fanny on a bird. Especially during nesting season, they’re up at the crack of dawn and spend the whole day going about the business of raising a family. There’s nest construction, and defense, and music performance anxiety, and feeding their young. It’s not easy.

Unless you’re a cowbird. 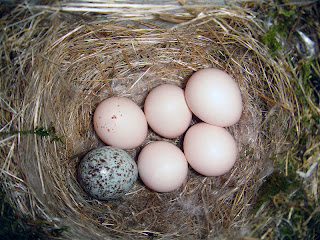 Cowbirds are among the animals collectively referred to as “brood parasites,” and they’ve figured out how to rig the system. Cowbirds roll out of bed when they feel like it and have sex with, you know, anyone, as long as it’s probably another cowbird, and then the females go lay an egg in someone else’s nest–someone who may have been working on that particular nest for a long time and had it just so. The cowbird egg may be bigger or more speckled or otherwise different from the eggs of the nest proprietor, and yet that proprietor will often incubate all the eggs, and then feed the cowbird when it hatches. Furthermore, the cowbird generally hatches first and starts kicking out the other eggs. The cowbird nestling is a giant mouth on bird legs. Any surviving original hatchlings wither in eclipse under its gaping maw, and the parent birds run themselves ragged trying to fill it up. The cowbirds prosper at the expense of the hard-working host birds, and their success depends on the host birds not noticing. 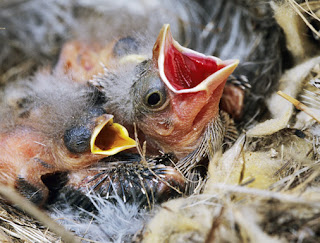 It’s hard to imagine how a little mama warbler would mistake this pituitary case for one of its own, but sometimes things sneak up on you in life, especially if you’re busy, and you can find yourself in a situation without knowing how you got there. Especially if it’s all you can do to fend for yourself and your family. Even among humans, it’s not uncommon to trudge through your work-a-day world and suddenly wake up in mid-life and discover you have a gigantic, speckled ass. And divorce is too expensive.

Or, it could be that the host bird is just programmed to be nice. I haven’t forgotten the time Dave came home from the tavern towing a pert young blonde and said, just before falling into a fast, flatulent sleep, “this is Denise. Talk to her. She’s been hitchhiking up I-5 from California and she thinks she’ll be safe because she has an angel on her shoulder.”

So I talked to little Denise and informed her she wasn’t going anywhere, she was staying right here with us until she found a safe place to live and renounced her invisible angel, and that was that. And that was that. She stayed for a few days, then a few more days, and on into months, eating my food, wearing my clothes, wrecking my bike, periodically offering to whip up some “peanut butter and spices on crackers,” all the while keeping up a bright soprano patter of thought-free conversation until we had to kill her, with no angelic intervention, and it was a tremendous waste of effort and resources, although the new concrete patio was nice.

At any rate, this situation obviously benefits the cowbirds, who are free to go about hoovering bugs to their big fat hearts’ content, since they don’t have to do any of the work of maintaining a domicile and child-rearing. It is of no benefit at all to the host birds. Why do they let such a thing happen? Well, cowbirds are stealthy. 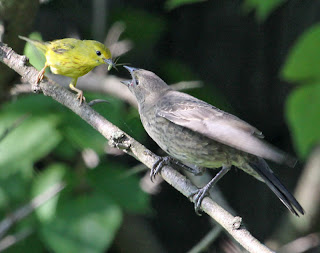 They scout out host nests while they’re being constructed, and squat in them when they know the nest builders are hard at work collecting materials. The day before they plan to drop an egg, they’ll come by and kick out one of the host eggs. They plant one of their own in among the others. Then they quit making payments into the host birds’ pension funds and tell them they’re better off investing their own money, even though they aren’t. Meanwhile they raid the pension funds for executive bonuses, and finally they explain the whole defined-benefit pension fund thing is not sustainable, what with their raiding and all, and go after the union birds’ pensions too, because their success is ruining their narrative.

They lay a lot of eggs and deposit one each in nests all over the territory, taking advantage of the new lenient bankruptcy laws to restructure corporations, and use the Net Operating Loss Deduction to avoid any taxes at all, while allowing them to borrow money to raid other nests and close some down and sell off the assets, thus transferring all the risk from stockholders to individual taxpayers. Then tax reform encourages them to move factories abroad and escape federal income tax. By the time they pressure Congress to repeal the Glass Seagull Act, there is nothing to stop the cowbird from getting fatter and fatter at the expense of the host birds’ own nestlings. The cowbird profits handsomely no matter what befalls the birds that work so hard on their behalf.

You have to wonder if such a scheme is sustainable, of course.  If the host birds cannot learn to recognize a fat cowbird squatting in their own nests, they may not survive, and the cowbirds will no longer be able to profit from all of their work. And some species have indeed learned to defend themselves against the cowbirds. What the cowbird does, however, is plant eggs widely and indiscriminately. The American brown-headed cowbird has been observed to parasitize the nests of 220 species. Even if the whole operation falls apart some day, they’ll have had a mighty nice run.