Pass The Cheese And Quackers 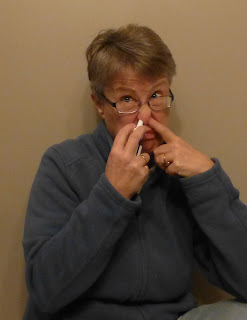 Medical specialists may seem like dull people, with their narrow focus and all, but they have fun at parties. I know this now.

Let me back up. I’ve had a long-standing policy of avoiding non-recreational drugs. I’ll step into a small nest of antibiotics if they’re called for, but I think the prescription drug business is a racket and a trap, especially the older you get. No one ever seems to get off of their meds, and instead they get more and more of them, and the meds start playing with each other and not with you, until all you are is a hollow host for pharmaceuticals. A lot of older people I know are having more trouble with their drugs than they are with whatever they’re supposed to be treating. I don’t want to jump on that train.

Which is all well and good, inasmuch as nothing really bad ever happens to me. It’s been an easy policy to carry out, so far. And yet, out of sheer irritability, I got myself on a drug. I went in to the Ear Nose and Throat guy because of my chronically clogged crustacean tubes and he looked in my ears and up my nose and down my throat, because that’s pretty much his whole sad life, right there. And he declared my hearing perfect and my crustacean tubes open on both ends.

“But they’re not,” I insisted. “Particularly the left one. In fact, the only time it’s opened up in the last eight months has been when I’ve been on an airplane.” I’m aware this is completely backwards, but there you go. People have been known to drive their babies around to get them to sleep; I’m wondering how long I can be allowed to stay at 30,000 feet, because it’s like a little slice of heaven up there. 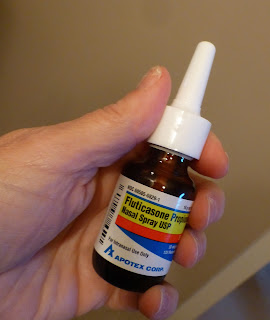 “Well,” he said, “if it’s even a tiny bit clogged, it can feel uncomfortable, I suppose,” he said, thickly implying that I have inserted an imaginary bean in the middle of perfectly serviceable crustacean tubes that are obviously open on both ends. “Tell you what,” he went on. “We can put you on Flonase. Sometimes that will clear things up. But I have to warn you: too many times people give up on it too early. You have to take it for at least two months before it takes effect.”

Flonase. Great. A liquid you shoot up your nose. I’ve spent decades trying to keep liquids out of my nose. But I was irritated that this doctor thought I had a fantasy ailment, and yet had a treatment for it. I’d had my heart set on relief; I gave it a go. I was given six months’ worth of nose juice. What could go wrong?

The pamphlet was helpful. Do not take Flonase if you’re allergic to Flonase. Avoid people who are sick or have infections. Avoid spraying in eyes. Close one nostril; carefully insert applicator into the other nostril. Oh! The other nostril. Check.

Three months in, I’ve noticed no change in my condition whatsoever. A drug with 120 doses in one tiny bottle doesn’t seem like it could be too dangerous, but I decided to look it up online. 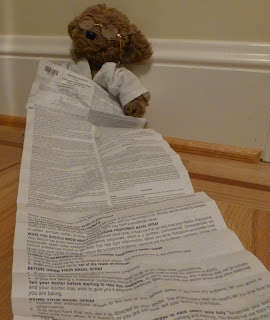 Well hey!  You can overdose on the stuff. Evidently you can go blind,  your bones can shatter, and you might develop “fullness of face, neck, and trunk, increased facial hair, and a lack of menstrual periods.” All of which describe me to a tee. Also, it’s for congestion, sneezing, runny nose, or itchy or watery eyes due to allergies. None of which I have. This is nuts. I must stop taking this shit now.

But he did say it takes a long time before I’ll see any effect. I’d hate for the first three months to be wasted. Maybe I’ll give it another few weeks.

The doctor is yukking it up at the Medical Specialist parties. “Did it again,” he’s saying. “I got one to spray shit up her nose for no reason whatsoever. And get this,” he pauses to dab his eyes, “I told her she wouldn’t notice anything for at least two months,” and the rest of the guests guffaw and splutter into the cheese plate. Glasses clink all around. The pharmaceutical rep has to cross his legs, he’s so overcome.  Only the proctologists are having more fun.