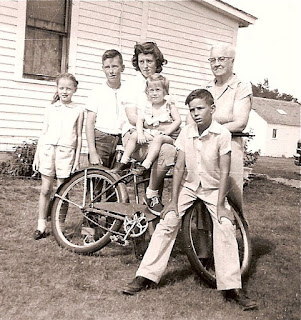 We were all chatting in the line to get passport photos. “Where are you traveling?” the nice lady behind me asked.

“North Dakota,” I said brightly, and then everyone got sort of quiet.

But indeed to North Dakota I did go. That’s where my cousin Don lives, and we were having a cousin reunion, with four out of five first cousins on my mother’s side in attendance. The last time we were all together was almost sixty years ago at our grandma’s farm in Balfour, population not-so-many. Everyone in my family is nice as pie because that’s what you get in North Dakota. It’s almost as if my mom’s side never met anyone rotten in their lives, so they assumed the best of everyone, and you know? People respond to that. Don is probably the nicest of us cousins, because he didn’t stray far from the Grandmothership, whereas the rest of us got contaminated to some extent by living elsewhere. Don might be the nicest man in North Dakota, now that our Uncle Clifford is gone. 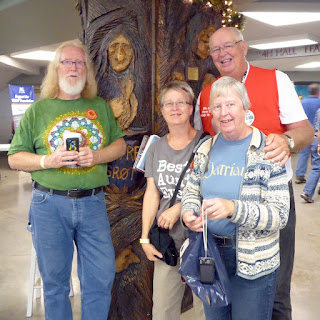 Minot, I’m sure you’ve heard, is where the annual Norsk Hostfest is held, the largest Scandinavian festival in the country. It’s popular. You have never seen so many gosh-darn nice white people in one place in all your life. In fact Dave and I have a friend here in Portland named Bruce Johnson who is just about the nicest white guy we know, and by golly if he wasn’t there at the Hostfest too. And you will never see so many people in one place who are not staring at their cell phones. No sir: these were people comfortable with eye contact. And, to be fair, mostly on the riper side of middle age. 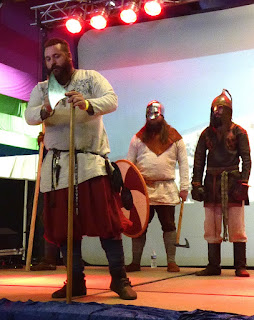 There was music, and food, and arts, and crafts, but what really perked my blood was the little group of authentic Vikings they had imported from the eleventh century. They were outstanding. For the first time in my life I felt as though my maligned fashioned sense has been validated, with its emphasis on pajamas and maybe a kicky T-strap shoe in soft leather. The men wore simple tunics over baggy pants, although there were a few T-shirts in evidence–I know!–and if authentic Vikings can show up in T-shirts a thousand years before they were invented, is it so hard to imagine they also discovered America way before anyone else except the people who already lived here? I submit it is not. 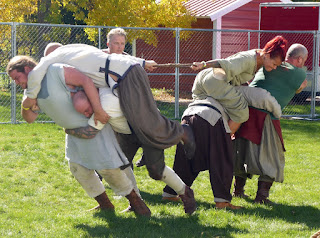 Most of them had holes in their clothes, but those were authentic, too, and come from their hobby of slicing each other up with massive axes and spears and what have you. You’ll find none of your dainty arrows and epees here. We were treated to a demonstration of Viking fighting techniques which left no doubt that the standard outcome was death and gore and finality all around: clobber and cleave all the way to perdition. Consequently, all of the violence has long since been carved out of the gene pool and only the inoffensive and amiable remain, some of us still wearing our heritage pajamas. 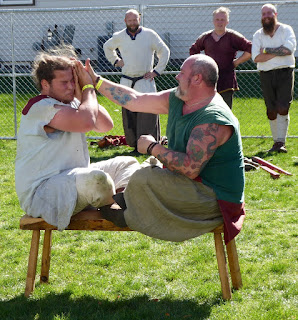 The Vikings who survived being cleft down the middle, or who were pre-cloven, also displayed their sunny side with games of all sorts. All right, there was only one sort, with several versions. They involved one form or another of jumping on each other really hard, and then trying to pull each other apart. These games were done in teams, except for that one wherein two men sat cross-legged on a bench and took turns slapping each other into kingdom come, or off the bench, whichever came first. Awesome. Winners of any given game celebrated with a mighty shout, a vestige of which remains to this day in modern Norwegians on bingo night.

Cousin Don also treated us to a splendid tour of northern North Dakota, and anyone who dismisses the landscape as flat and dull needs to have his soul taken in for repairs. Here is a banquet of rolling green and gold, slathered in pelicans and cranes. Even at night, sometimes God throws northern lights over the place just to show his approval. Of course we also made sure to visit Goodness Central, the Home of Grandma, and found it still faithful to our memory. Except that the current owners–no doubt slaves to comfort–replaced the old farmhouse with a tight and tidy ranch, displaying a cruel indifference to our nostalgia for that drafty old sucker with the colossal coal furnace we knew and loved but didn’t have to live in. 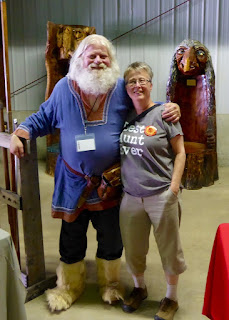 Then it was on to the stately and provincial International Peace Garden, where my shiny new passport allowed me to poke a toe into Manitoba. I lingered, hoping my Canadian friends would sense my presence, but having an attractive and sensible Prime Minister has made them complacent. Ah well: farewell Canada! See you in November, maybe!

Next up: Norwegian Cuisine. Ooh ja.