Pikas Down The Pike 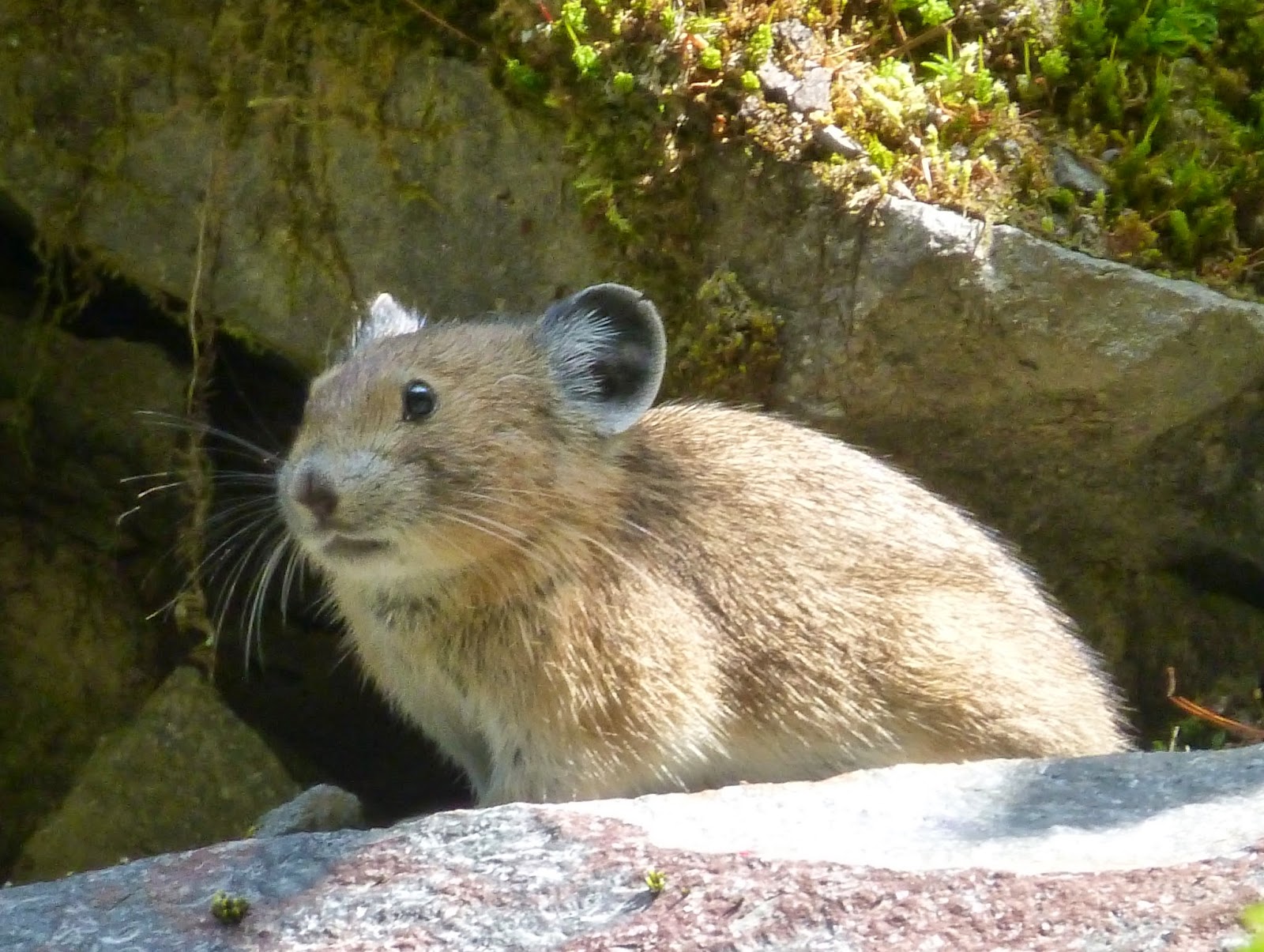 Just a warning. I keep a pretty decent pace when I’m hiking up a mountain, but any time we pass a nice boulder field, I’m going to pull up short and go meeeep. There’s nothing you need to do about it. I’m just sending out a little hey-there to one of my favorite critters. Sometimes one meeeeps back.

We loved pikas even before we spent a delightful few minutes in Glacier Park watching one totally punk our dog. Boomer was an optimistic mutt by nature and was much energized by the prospect of nailing a rodent even though she went seventeen years without ever getting close. Bless her fuzzy little heart, she’s always thought today was the day. We could all use an attitude like that, and it’s not like there was ever a chance she’d do any lasting harm. We didn’t even bother explaining to  her that pikas were lagomorphs and not rodents–she was not a detail dog. Meeeep! went the pika, and Boomer scampered after it, and it ducked into a hidey hole in the rocks followed by Boomer’s head. The pika would reappear a few feet away, turn to the dog’s avid, quivering tail, go meeeep again, Boomer would snap her head up so fast she beaned herself on the rock, and tear after the pika again. The pika had things to do so we didn’t let this go on too long, but I can’t help but think it was enjoying itself. I think it had a little grin. 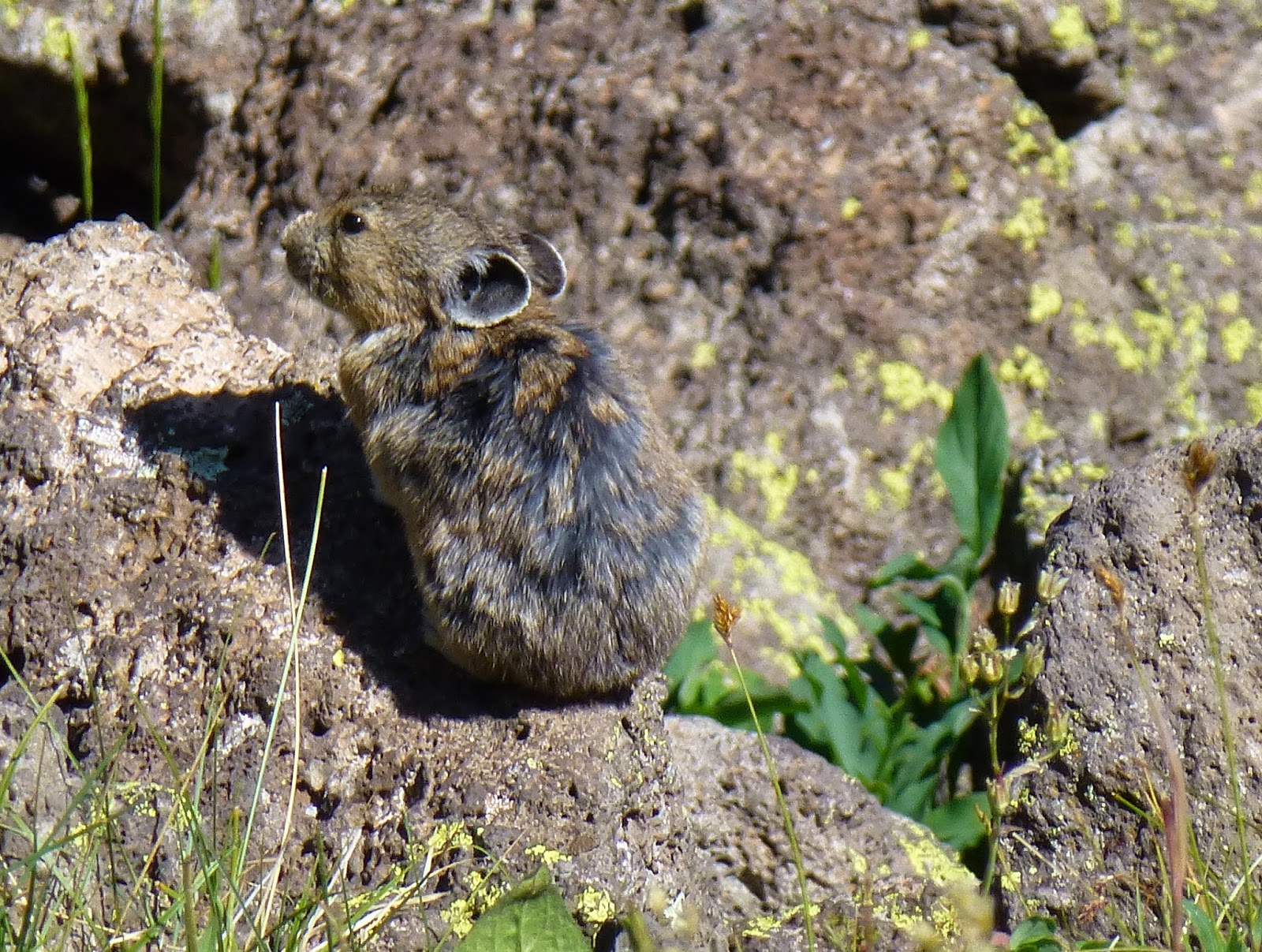 So when Dave and I had the opportunity to go to a lecture on pikas downtown, we did. That’s when we learned that if it was a grin on the pika, it was a shit-eating one. Pikas are among the animals that are big on eating leftovers, after running the original meal through the system once.  It’s one way to contend with a vegetarian diet, because plant cellulose is hard to digest; chewing the cud is another. Eating one’s own shit works fine for the bunny family because, conveniently enough, they are incapable of throwing up. Still, the whole business is another mark in the plus column for being a baconivore.

The pika spends most of its time in higher-altitude rock piles. He eats plants (twice) and gathers more to make hay for the winter. By the time it gets really cold the pika should have a pretty good hay pile going from which he will eat all winter. He does not hibernate. He’d rather eat dried-up old flowers (twice) than take a nice nap. Tastes differ. However it is a remarkable thing that he knows to make his hay pile. Personally, I don’t anticipate anything vividly enough to be that prepared. If I’m warm when I leave the house, I won’t take a sweater with me even if the temperature is sure to drop, because I can’t imagine being cold. (I have evolved to accompany a man who will give me his jacket.) But I’m not a pika. Also, I eat bacon.

They’re particular about their location. They like things cool. If for some reason the world should be getting warmer, they don’t have a ton of options. They can go higher up the mountain, but they’re not really set up to migrate. As a result the pika appears to be in decline. People who study them are looking carefully at the margins of their habitat. The edges of their range represent the conditions that are just tolerable for them, so if they begin to disappear along the margins, it’s pretty clear their habitable range is shrinking. 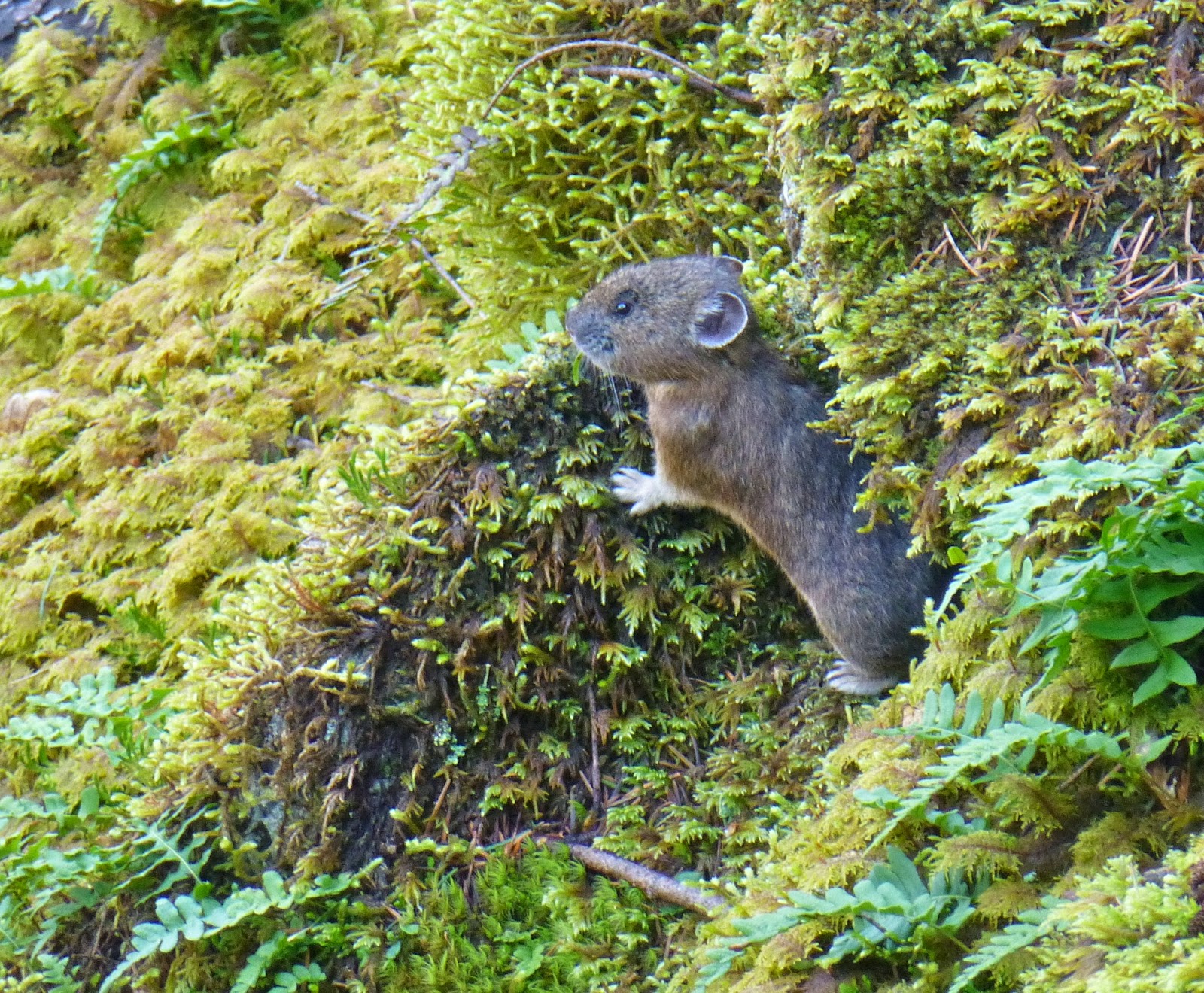 No one’s gotten anywhere with trying to get the pika listed as endangered. Because then we’d be legally obligated to protect them, and the only thing we could do for them is try to halt climate change, and that means we have to start doing a lot of things differently, so–it’s sayonara, pika.

Meanwhile, the same techniques can be applied to humans to see if we’re in trouble: check conditions along the margins. Not those poor saps in the little island nations that are being submerged–we consider them marginal people to begin with. Trouble is, we don’t recognize our own margins anymore. We blast the air conditioner. We jack up the thermostat. We think water comes in bottles from Nestle. By the time we figure out there’s no more mountain to climb up, it’s too late. There’ll be nothing left to do but eat shit and die.