A Pile Of Doe 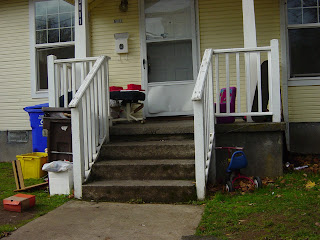 The bad neighbors have been evicted and they’re gone, yes indeedy spank the Lord and praise my fanny they’re gone, and now, as I gaze on the detritus left behind, I’ve become more contemplative about the nature of neighborliness. It’s a liberal thing. I mean, I never went over there with a plate of cookies or anything. By the same token, they never offered me any of their crack. But they never actually set anything on fire, and they were real quiet until noon most days. It could have been worse.

As it is in Pennsylvania’s N. Buffalo township, for instance, where the neighbors of Mr. Randy Good are pondering their next move. Mr. Good has a contract with the township to scoop up all the dead deer on the highway and haul them to the landfill, and what with one thing and another, he’s been stacking them in his back yard instead, where about two hundred of them are piled ten feet deep, before settling. Even in cold weather, this has had a deleterious effect on the atmosphere, and the neighbors have taken to burning candles in order to deal with it. Candles, torches, whatever. 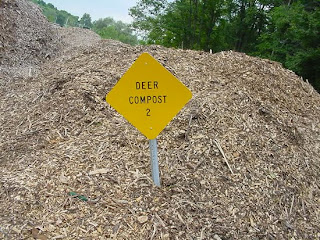 I don’t think this is sanctioned official procedure. In the post office, they frowned on us letter carriers taking our work home, especially those of us with garages or basements. But even for those mailmen who did get involved in home mail storage, the storage system itself would not have been a nuisance to the immediate neighbors. Anything of an olfactory nature was more likely to be emanating from the mailman himself. It’s a whole different kettle of fish with deer. 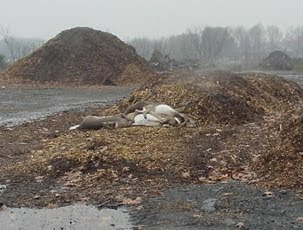 Apparently, you can compost dead animals as though they were turnips, and in some locales, that’s what they’ve taken to doing. It works the same way as yard debris, and involves a large enough pile to really heat up, some water and a means of turning the heap. Mr. Good might well have had a successful composting program going there eventually. He would have needed something to turn his pile with, a source of water and enough roadkill to really get it cooking, which would probably take several more weeks of collection, by which time, of course, he would have discovered himself murdered. 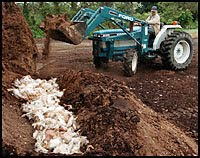 The whole scenario puts me in mind of a dreadful incident from many years ago right here in Oregon. In 1986, Sheridan poultry farmer Larry Mohler lost 26,000 chickens at once during a heat wave when the fans in the coop broke down. It was a tragedy all around, but Mr. Mohler did the right thing and plowed his chickens under right away with a front-end loader. All was quiet for a few days until the bacteria in the chickens’ guts kicked in, digesting tissues and producing gas. According to eyewitnesses, the very dirt itself began to rumble ominously and bubble up and then all at once the chickens, all 26,000 of them, just blew sky-high. “It looked like a little Mt. St. Helens out there,” Mr. Mohler mourned, as well he might. I know I was moved to tears when I pictured it. And what is a poor chicken farmer to do under the circumstances? 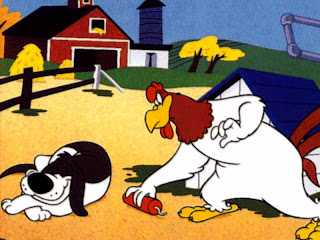