Please Return Your Ears To Their Full Upright Position

Most of us are familiar with the routine of air travel. Once
the paying customers are strapped down tight, and the massive vehicle
improbably chugs into the air, there is a moment when, with an audible squlllcch, the flight crew turns off
everyone’s ears. This is a courtesy warning, like the bong on an intercom system before the voice comes on, and it alerts
passengers to the fact that the airline is a socialist state in complete
control of their bodies. Everyone will be expected to contribute viruses according
to his ability, and the airline will redistribute them according to need. Once both
the cabin pressure and pathogen allotment have been equalized, the ears are
returned to their original condition.

That is the expectation, but things can go wrong, and after
a recent flight, I came home to find my ears still turned off, and they have
remained that way for three weeks and counting. Earholes are my primary means
of allowing things to go in one ear and out the other, and I am finding things
uncomfortably jammed up now that all ingress and egress has been prevented.
It’s a problem. Because, on any given day, I have way more thoughts than I can
really use, and only so many ways of getting rid of them. One way is to get
them “on paper,” which is an old-timey expression meaning arranged digitally on
a screen in such a way as they could be printed off on a less obstreperous
printer than I happen to own. But very few of my thoughts can be disposed of in
this way.

and these kinds of thoughts must be allowed to flow freely,
or they will congeal and turn green and drain out my nose. Which is what they
are doing. Endlessly. There is no explanation for this phenomenon other than
thought-sludge because my head is far too tiny a vessel to contain this much
material. I don’t have a lot of room up top for this kind of thing. Even my
sinus cavities are negligible, which is one of the reasons I am not a prominent
Italian tenor. 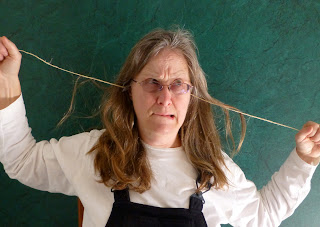 The stopped-up ear is very annoying at first, but after a
couple weeks it is even annoyinger, and I am crabby about it. And no wonder,
because the problem is that my crustacean tubes are blocked. The crustacean
tubes are charged with regulating air pressure so as to protect the delicate
inner ear bones (ossicles). The stirrup, the advil, and the speculum are very
tiny bones that evolved from antique reptilian jawbones (fossicles) when it was
found that they weren’t really doing anything important with them. And they
must be protected because they’re not going to grow back no matter how many
stem cells you throw at them. However, the fact remains that there is nothing wrong
with the air pressure around here and my crustacean tubes’ attempt to regulate it
makes as much sense as trying to rub the kinks out of a cat. There’s no call
for it.

One likes to get straight to the heart of the problem, and I
blame the airlines. It could be just human error, sort of like when my neighbor
goes off to work and forgets to turn off his dog, and it’s going off all day
long. So what with modern technology and all, maybe a call to the airline could
clear this whole thing up. They might be able to do it remotely, if the ear
reset button is in The Cloud or something and I can get an access code. Either
that, or I have a cold. But that seems so far-fetched.
At least I can’t hear the neighbor’s dog.
By Murr Brewster|2021-11-09T21:04:19-08:00February 20, 2013|Uncategorized|61 Comments