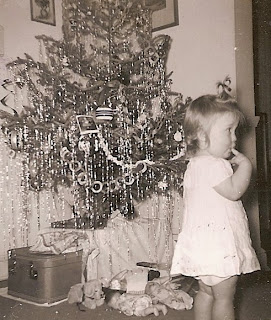 We always got a balsam fir for Christmas, because Daddy thought those smelled the best, but even if we picked it up early, he leaned it up against the back porch to keep it cold and fresh until we put it up, which was never early. My parents were firm believers in moderation in all things, even though in some things, like swearing and spending money just because, they were more abstinent than moderate. It could have been put down to a Depression mentality at work, but I now believe that my father was a Wise Man who fully understood the damage that excess and extravagance can do to a kid and her ability to be joyful. So when the tree did come indoors, it was well freighted with anticipation. There was a routine. Daddy was in charge of making the thing stand upright, which took a lot of frowning and dagnabbiting, and then the light strings were laid out on the floor. There would be that moment of hope just before they were plugged in, dashed annually–another tradition–and then we’d unscrew the bulbs one by one until we found and replaced the culprit. Ornaments would be hung by all and later redistributed higher on the tree, and then we draped the tinsel on. Ours was a wrinkly tinsel family. The tinsel was gleaned and packed away every year. Dad put one modest string of light bulbs out on the porch and one modest electric candle in the window, and that was that. Every year I lobbied hard for extra lights, with the same result as I got begging for a dog or a house with a rec room. I didn’t even know they made unwrinkly tinsel. 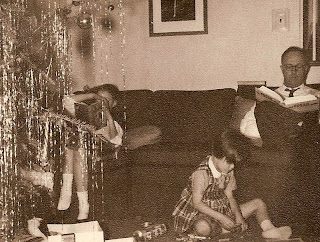 But our modest tree filled the bill for joy every year. Overdoing it would not have increased it. In fact, when it comes to joy, you get less bang for every successive buck, which I did not learn for a while. Christmas is famously for the children, and I was the last child, the one my mom charitably referred to as a “surprise,” showing up at a time my folks might have preferred grandbabies. “You’re what’s keeping me young,” Mom would tell me, although the exact opposite case could have been made, especially during my teenage years, but I took the charge seriously, and every year I mustered as much enthusiasm as I could credibly pull off. But each passing Christmas pushes us further away from our childhood, no matter how we try to hold on. Mom and Dad were faithful to our little traditions and that helped. That’s why the first Christmas away from home has the potential for bleakness.

I got lucky. I spend my first Christmas away from home in Bavaria with friends, and there were stars and snow and castles and picturesque tipsy Germans and goose for dinner. We were studying abroad, and none of us roommates had much money, so we decorated our one house plant and bought each other  as many presents as we could manage without spending more than £2.50 all told. It was challenging and very, very fun, something that acquiring more money allows one to unlearn. 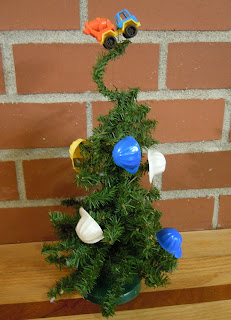 The next Christmas on my own was spent at a boyfriend’s house and was a riot of excess. I’d never seen more gifts in my life, and that part seemed good, but we opened them on Christmas Eve, which was so wrong: abandoning Santa snaps the final bond. But you get over it.


When Dave and I moved in together, we got our first tree, without a lot to hang on it. Each year the tree got a little bigger and more crowded. One year I asked Dave if we could fit a grand piano in the house. He eyed a bearing wall thoughtfully and allowed as how we probably could if we had to. Oh goody, I said, because I just bought one. That Christmas I scavenged a large windblown branch from a fir tree and Dave stapled it flat to the wall that he now had to take down. He stapled harder and louder than might have been strictly necessary. We bought each other flat presents to lean up against the wall: books, record albums. 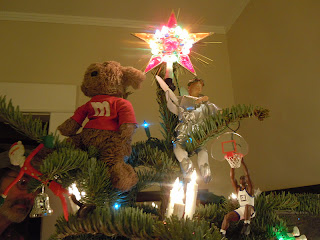 But Dave was often gone for holidays, working a shut-down boiler at a mill out of town. One year I bought a one-foot plastic tree and decorated it with tiny plastic hard-hats and a small cement mixer for the star, and I wrapped about twenty one-dollar items for him and his crew and mailed it all off. They had to guess which presents to pick. There was an airplane bottle of Jack Daniels and a similarly-shaped bottle of hair goo. There was a rolled-up porno magazine and another rolled-up Woman’s Day. It was the most fun I’d had buying presents since Bavaria. 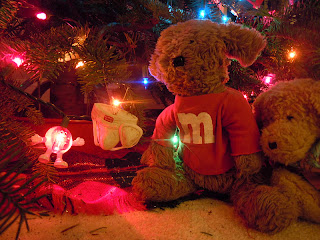 Other than that year, every Christmas tree went up about the same way Dad’s did, only Dave had a more emphatic vocabulary. Pootie showed up at Christmas in 1989. It was no accident. He no doubt had a scouting report that confirmed we had no spawn that might dilute our attention, and he moved in and began arranging things to his liking right off the bat. Pootie is, technically, a stuffed dog, and the fact that he generally gets his own way around here is a sign that we were wise not to have children. Pootie indicated he needed his own tree–fine, whatev–so one year we got him a small one, and he jammed it full of tasteful ornaments. His taste, sadly. There were basketball players and ceramic jock straps and a skinny Gumby-Santa and M&M lights and a star so garish that the nativity story had to be rewritten with the little lord Jesus’s manger set up at a strip mall, attended by the Three Car Salesmen and a flock of possums. It’s da Tannenbomb. Our own tree got smaller and smaller through the years and Pootie’s got bigger until now all we get is Pootie’s tree, and we don’t have one at all. Because nobody wants to see what happens if the Poot doesn’t have his Christmas.


After all, Christmas is for the children.