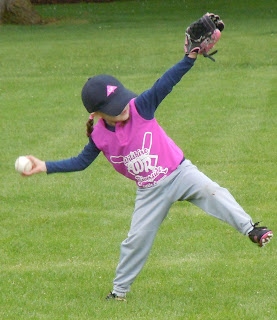 From a distance, squinting, we couldn’t tell what we were looking at. March of the biped tortoises? I guessed. Diving bells on parade? Dave ventured. Enormous shells were moving around a field with little legs under them. We moved closer. And Lord love a duck in springtime, it was baseball. It was the Wilshire-Riverside League, the best in post-fetal baseball, and, like every other form of baseball, it was terrific. Call it the Pre-Wee League.

We’re skeptical about efforts to rope tiny kids into team sports. It was probably the niece’s soccer mudathons that did it. We’d hunker down under tarps on the sidelines and cheer whenever it seemed appropriate, while on the field the kids accreted into scrums with everyone making with little dinky kicks like a single multi-legged organism until the ball squirted out, and after a while one of the kids noticed and ran after it (cheer) and the whole organism reassembled in the new location. There was fresh air and a dab of movement involved, so that’s good, but the attempt to introduce structure into their brains was like trying to braid a pitchfork. We both thought they’d have been better off with Duck Duck Goose for another year or so. 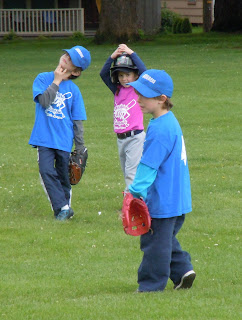 But the Wilshire-Riverside League won us over. Kids were happy. Parents were happy. Everyone had a good time and nobody was yelling. And it all had to do with the rules. There weren’t any.

Oh, there sort of were, but they were more like suggestions. It was hard to go wrong.

Each child had five pitches to saw at, or eight or nine if the situation called for it, and then the batting tee came out, and the child could whack at it until the ball rolled off. Each team’s own adult coach was the pitcher, tasked with trying to make contact with the erratically swinging bat. So everybody hits, or in some other way encourages the ball in a forward direction, and everyone runs the bases. There are three innings. Each inning is over when everyone’s had a turn at bat. No runs are scored. Nobody wins or loses. 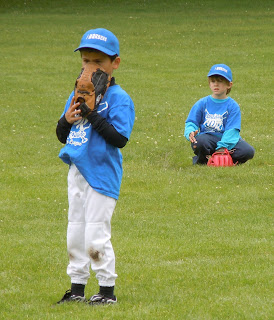 In theory, a runner can be declared out, if by some coincidence a ball is chased down at a base before the runner manages to get it out of first gear. In that case, it is suggested to the runner that he might want to go back to the bench, but if he gets too involved with the second baseman’s bug collection, he can stay put and the other runners work around him.

On this Saturday afternoon, the Georgia-Pacific Girl Power team was facing the Barbers, an all-boy team. G-P wore pink, and the Barbers wore blue. This was helpful for gender identification, because the helmets prevented us from seeing the color of the little bows placed over their soft spots. So let’s see how the action plays out: 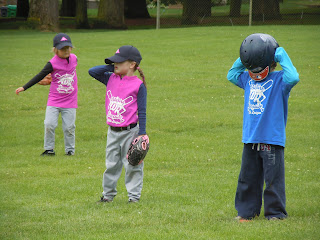 The Barbers, all five of them, trot out to their designated positions, where the second baseman picks through the grass for bugs, the third baseman consults a passing cloud, the pitcher (who does not pitch) crouches in total safety and total eclipse behind the coach, the shortstop experiments with alternative hat and mitt placement, and the highly alert first baseman hops up and down. Number One in the pink line-up steps up to the vicinity of the plate. Pitching commences. Swing, and a miss. Swing, and a miss.

Miss, and a swing. 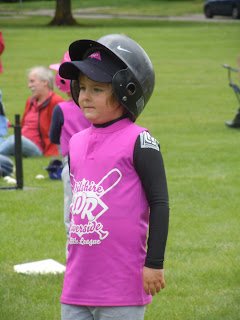 The batter is all limbered up for the tee now, and within three whacks has dislodged the ball in the direction of third base, which is so astonishing that everyone pauses to admire it, except the highly alert first baseman, who cannot contain himself from charging all the way to third for the ball before spinning around in confusion as he attempts to field it to himself on first.

Second batter for Pink is tiny. Her chin comes into view under her helmet as she tips her head back to locate home plate, where she squares up like a sentient mushroom. The helmet is enormous. A cloud of bats could fly out of there with no one the wiser. At the first pitch, Tiny trickles the ball into the infield and heads off toward first base at a dead totter, finally going the distance as more and more of the base path comes into view. With both hands on helmet she continues around the bases behind the first runner and both of them fetch up at the same time on home plate in time to watch the ball’s triumphant arrival at first base (cheer). 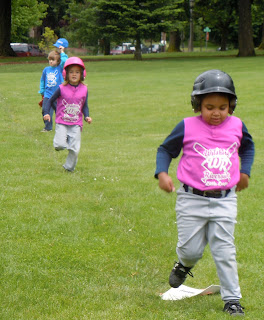 A half hour later Pink takes the field with a minimum of one player per position including outfield where, defensively speaking, their presence is strictly ornamental. They even have enough players to field a catcher, who is armored up with enough safety equipment to tip her over well behind home plate, from which position she assembles a ball collection. An adult wings them back to the pitcher.

It was a terrific game. Everyone had a good time. The team cheers were a triumph of coordination. Both Pink and Blue nailed them.