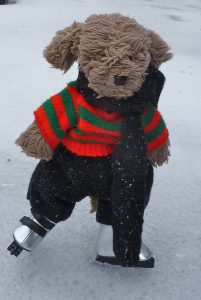 The slopestyle event. Tension was high. Would the young American snowboarder go for the 1620 backside?

Clearly I was overdue for a dose of the Winter Olympics. I vaguely recall Katarina Witt stomping Teutonically across the ice. And Jean-Claude Killy firing himself downhill as though he was trying to put the greatest distance between himself and his common sense. Uh, Jean-Claude, it says here, is 78.

It’s been a while.

Holy shit. They’ve got kids doing stuff now that won’t even be invented for another ten years. Don’t these people have mothers? And you don’t even need a mountain anymore! Or snow! You can just manufacture winter! The Republic of the Congo’s already putting in for 2026.

In Beijing they made a mountain out of I don’t know what-all and stuck a bunch of snow on it and called it the Shougang Big Air, and it’s designed to toss snowboarders into orbit long enough to tumble the rocks in their heads smooth. And they do it against a backdrop of a nuclear power plant.

[Is not nuclear plant. Is old steel mill. Ha ha!]

Fine, but at one point in mid-big-air their skeletons can clearly be seen flashing briefly against the cooling towers, enabling the judges to accurately record deductions for subluxations in lumbars three and four. But it’s spectacular. We’re all on the edge of our beanbag chairs waiting to see who would go for the nose butter triple cork with a Japan grab!

The various ice-sliding events are old-school, sure, but it never gets old trying to imagine why someone would do this even once. Basic luge involves lying down on a TV-tray a little longer than your butt crack and pinballing down an icy ditch at around ninety miles per hour, or just short of a velocity that could be called terminal. Given gravity and all, it seems like everyone would arrive at the bottom in the same time, but there are fractions of a second differences depending on initial speed and whether or not they hit any of the flippers. Men’s Luge is the one with the nuts on top. Even the degree of scrotal puckering could make a critical aerodynamic difference. A similar event is also done with one man lying right on top of his partner for some reason but it seems like something they might want to do on their own time.

The real thriller is the Skeleton, named after the condition of the earliest practitioners once they reached the bottom, closely followed by clumps of abraded flesh. The Skeleton is done head first. Steering is accomplished by movements of the thighs and shoulders until they’re scraped off, but thanks to modern space-age fabrics, the participants arrive intact at the finish line as human-shaped bags of chutney.

To those who complain that the Bosnian lugers get extra momentum from all their consonants, announcers Alx Krnyx and Krpnk Grnjk point out that they’re also at greater risk of snagging a K on the straightaways.

They still have the really boring events such as the cross-country shooting biathlon that originated among early hunter-slitherers and was probably pretty exciting in circa-1860 Finland. It’s been updated so that the competitors ski uphill wearing schoolkids’ Kevlar backpacks full of banned books and drop to their bellies to type out a text message of 128 characters including two uppercase letters, two punctuation marks, and an emoji.

Alpine downhill is another old-timey event and a particular favorite for the cleanup crew because all the body parts end up in approximately the same place. Seniors everywhere went nuts this year when 41-year-old Johan Clarey rocketed down the slope to become the oldest medalist ever, even though he arrived at the bottom three days younger than when he started.

My favorite new event by far was the Grand Whoop Whoop Snowboard Cross with its jumps and knuckles and berms and steeply banked turns, where good American girls named Meghan, Stacy, Lindsay, and Dipsy risked their ovaries for gold. Features on the snow are defined by lines of the same familiar blue fluid used to simulate absorbent qualities in Ladies’ Hygiene ads. It was cool enough to watch in the qualifying rounds where they went one at a time; I was completely unprepared for the excitement of flinging four of them out there at once, when they had to edge each other out on banked turns so tight their pit crews, poised on the straightaways with pots of wax, fainted dead away.

All in all it was a fine show and all the winners should be proud to podium (it’s a verb now, Gramps) in front of the famous Olympics logo. The Five Linked Sphincters of Terror.