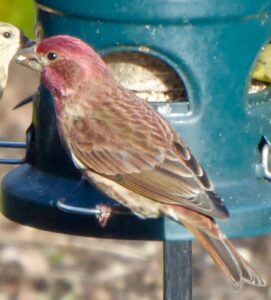 I’ve got a new project. Finches. It’s hard for a novice to diffrinchiate the finchery and I intend to learn.

Back when I despaired of recognizing any birds at all, my friend Linder told me “Just think. If you learn just one bird a year, you’ll know forty birds by the time you’re dead.” That was a bunch of years ago. But the point is, if you get your noticers sharpened up, your knowledge begins to accumulate. Take, for example, the lesser goldfinch, whose existence I had not even suspected ten years ago, even though we have squadrons of them in the yard all year long, thick as mosquitoes, and my yard isn’t that big.

We have gobs of house finches. They’re your basic brown and white stripey numbers with pink heads and décolletage. And there’s a lot of variation, once you start looking. Sometimes they’re not pink at all, but an unrepentant orange. Some of them rock more color than others. But the other day I spied a finch that looked a little more adamant about its hue than usual, and I snapped some pictures. HUH! Could this finally be my elusive purple? I looked it up. There are plenty of sites that show you the differences although they all caution that it’s easy to get it wrong. I stared at my photos and just couldn’t quite pull the trigger on an ID. And then I thought: why spend all this time farting around looking stuff up like a self-educating grownup when I could just put the photo on my Facebook page and have my friends tell me in, like, two minutes?

And solid bird ID is what you can count on when you have hundreds of authentic birders on your friends list. The votes began to come in hard and fast. You’re always going to get a guess from your non-birder friends (“Grandma used to call them dingflappers”) because everyone likes to be helpful, but pretty soon you get a good consensus. I was hoping to hear from Sarah because she can pull an ID from a fuzzy shot of butt feathers exiting the frame in heavy fog, and I’ve seen her do it. Plus she’s local.

Anyway, exciting news! It came up Purple Finch, just as I had hoped. Chris, Cindy, Katy, Barrett, Mimi, Kim, Néna, all agreed and gave the reasons why, and Julie Zickefoose, in whose brain I store a lot of my memory, tied it all up with a half dozen unmistakable field marks, and seemed to have more ammunition on her belt yet, but ran out of typing.

And that’s when it occurred to me: I have finches. I have a seed feeder. I have a Project! 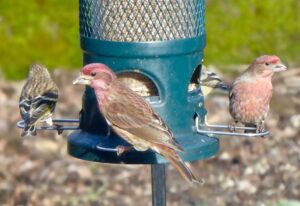 Not much of a Project, you say? For a creative woman with nothing but time? Fie. Smoking cigarettes and watching Captain Kangaroo is all well and good, but I need to branch out.

I’ve got a feeder right outside my window. I’ll devote a day just looking at tails. I’ll get the tail down. I’ll spend another day looking at primary feathers. There will be a Bill Day. And when a purple finch makes an appearance, my HUH will turn into an AHA. I will be able to astonish uninterested passersby with my expertise. (It’s a low bar. One of my neighbors mistook a flicker for a pheasant, so.)

I’ma bag me another purple.

And once I have all that down, I’m going for the gold star. The females. The males, per standard bird code of conduct, are the more decorative of the sexes, same as in humans, whereas the females just try to get the job done without drawing undue attention to themselves.

And as a result, there is a whole sisterhood of female songbird species that all look exactly the same, if you’re not paying attention. They’re fine with that. They’ve got stuff to do. But—for my project—it does appear the female purple finch distinguishes herself from her house finch counterpart. She has a distinct white eyebrow, which allows her to look askance at things. And she has brown streaks in her underpants. Which might very well be true, but it’s still a little rude to point it out.