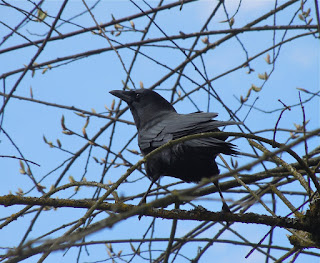 Every day, as evening approaches, dozens of small airplanes fly over the house, headed northeast for the airport–package planes, Dave says. And at the same time, crows in huge numbers fly in the opposite direction. For several hours, they can be spotted winging their way southwest over our yard. Clearly, they have declined the lucrative small-parcel routes that FedEx and the like specialize in, but for a long time we didn’t know what they were up to, or where they were going. 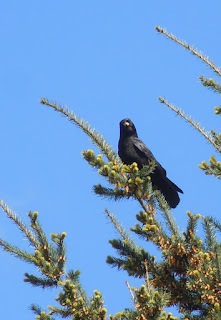 Our crows–the family we like to call the Walnut Boys, who live in the big Douglas fir across the alley–head out too. But their friends are also streaming in from much farther afield. It’s a daily mini-migration. As far as we can tell, every dang crow in the metropolitan area goes flapping in the same direction at dusk.  Come morning they’re all back again and ready to join the dawn raucous. I mean chorus.

We’ve learned that some of them convene for the evening in the larger neighborhood trees, but those are just minor cliques and outliers. Most of them are bound for downtown. Hundreds. Thousands. We happened upon them during a walk. They had settled in a large construction site. The tarmac was lined with them. It was the softest parking lot in town. Some of them spruced up in puddles and the rest hung out behind the velvet rope until it was time to hit the club. Currently they’re favoring a stand of trees near Portland State University. 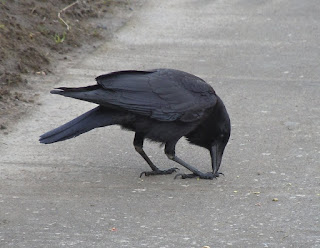 That’s what it’s all about. They’re going to a roost where they can let it all hang out. It might seem like having a slumber party every single night makes it less special, but they’re fine with it. Maybe there are a few introverted crows out there but you don’t see those. They’re nestled into their favorite conifer boughs with Jane Austen and a scavenged bag of chips.

The experts have theories about why they gang up. Perhaps they’re warmer, particularly if they’re downtown. Perhaps they feel more secure against the rare marauding urban owl. Perhaps they exchange information about which humans need pooping on, or about good food sources they found that day.

As if! Please. They might talk up a good dumpster find, but nobody’s giving away any coordinates. They’re just social. They’re all about family and friends. It’s hard to tell the age of a crow. The very youngest have bluish eyes, but other than that it’s a sea of conformity. Everyone gets a uniform. And the kids don’t leave. They’ll be kickin’ it with the adults for at least a year and sometimes two. But you can get clues to their maturity by their behavior, and there’s no better place to observe that than at one of their sleepovers. 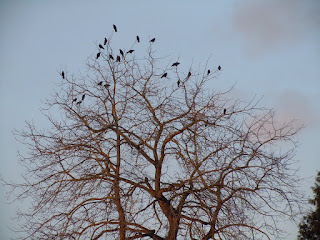 For a while it’s all yap yap yap and nobody is really listening to anyone else. Then the old ones nod off. The teenagers stay up and flirt. Midway down on the broader branches is where they have the Twister game set up. The adolescents are playing Truth or Dare for a while until they split off into smaller groups and swap implausible rumors about where eggs come from. The second-year juveniles sneak off as soon as the adults are asleep and head over to Ross Island to toilet-paper the heron rookery.

That leaves the youngsters, egg-fresh and blue eyes fading, to hold up the banner of innocence. As if! Please. They’re the ones making all those crank caws.