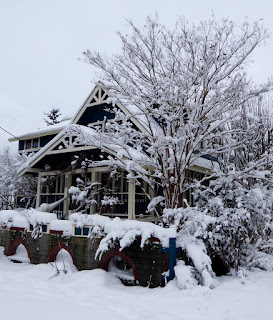 The meteorologists have gotten ridiculously good, and precise, too. It’s not at all unusual to look up the forecast and read “light rain beginning in nineteen minutes, tapering off in late June.” But they totally missed our twelve inches of snow last week, and I’m inclined to blame Editing. Editing told them to knock it down to three inches, because Portland never gets a foot of snow. But then we did. And it was fluffy. This was the kind of snow where every knob and twig becomes soft and plump and perfect. Rubensesque, even. 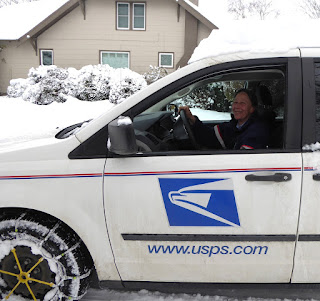 I never had a problem walking around in the snow delivering mail. But they always made me drive. On steep, narrow streets. Occasionally sideways. The kids would be out of school and sledding in the street, and they’d see me perched at the top of the block and scootch over just a little so I’d have a mitten’s-worth of space on either side of my vehicle, and I would stand on my brake and lean out the window and bellow at them in a voice that would drop an exorcist. “Get over! GET OVER! MOVE! GET YOUR HEINIES UP ON YOUR PORCH! ALL THE WAY! I’m not moving till you do! I’m going to TELL YOUR MOM!” The kids saw me only on snow days and they had a very different opinion about me than their parents. Their parents thought I was sweet as pie, but it’s the kids that have grown up and are running the show now, and this is why everyone pays bills online and the post office is dying.

Anyway, as soon as I’d gotten the kids good and hollered onto their front porches, I would let up on the brake and brush up on my petitions to the Lord until they sounded natural and lurch down the street looking for shrubbery to veer into just in case I missed the one asshole kid I was planning on using to stop my momentum. 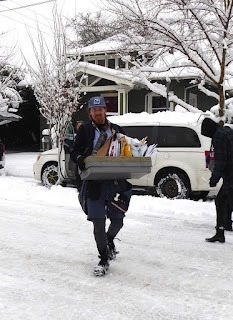 There was once an old, wealthy man in town whose videoed trip down an icy block in his Mercedes became an internet sensation. It was a steep one-way street, and he mashed into every single parked car on the left until there was a gap, and then he swerved down the right side to nail every single one of those cars, and got lucky and spun into the bumper that sent him into the Sexy Cowgirl With The Lasso and rocketed around the middle target and set off the whistles and barreled into a lamppost or two and just missed Tilt and then–and then–he just caught the lucky flipper at the bottom of the street and shot right back up to the top to do it all again more thoroughly, and the phones of insurance agents all over town began lighting up and ringing simultaneously, ding-ding-ding, and that street, ladies and gentlemen, was on my mail route.

But last week it snowed voluptuously, and we went for a little walk in it. A little voluntary walk in the snow, whilst not delivering mail. A walk in which we observed people delivering mail, although we, ourselves, were not so doing. Then we filled up the bird feeders and rigged up a heater for the hummingbird nectar whilst continuing to not deliver mail, and we stepped into a brewpub toward evening and had ourselves a nice pint whilst at the very same time not delivering mail, and, my friends, it was a beautiful thing.