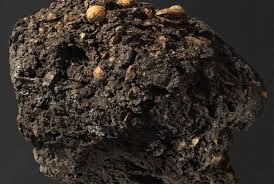 I guess the archaeologists are running out of golden pharaohs and stone statuettes and such, because now they get all excited when they find a nice old poop. They pick through it and conclude it belonged to the King because he ate more figs than oatmeal. It’s just human nature to imagine that any given poop you manage to dig up has to have come out of someone important. If you’re tweezering through shit instead of unwrapping mummies, you have to build yourself up somehow.

Why are they always finding single preserved turds? Who does that? I’ve heard a rumor that Louis XIV like to summon his favorite underlings to observe him on the potty, and I’d like to imagine at least one of them might have engaged in speculation and boxed some up in anticipation of a spike in royal crap futures. And he’d have been right, archaeologists being who they are, but you know his mom finally threw out all his shit one day like it was a baseball card collection or something.

Nevertheless singleton poops keep turning up. There is the Poop of the Unknown Viking, on display at the Jorvik Viking Centre, notable for evidence of Diced Saxon in the diet. And there is the piece of crap discovered recently in a museum in Denmark (and not the Netherlands, as you’d expect). If you want to get a leg up on making your mark in the antiquities world, you could do worse than to paw through the back rooms of existing museums. They never throw anything out. They’ve got all kinds of shit in their drawers, and no one ever does inventory. Anyway this particular wad was preserved in a bottle, and, according to the tag, was originally found in 1937 in an old bishop’s manor. The Poopetrator is assumed to be the old bishop himself, Bishop Jens Bircherod, making the specimen over 300 years old, and looking every bit as fine as it ever did.

Sure, let’s say it came from the Bishop, and not any of his servants! Why not? Who cares about peon poop? No one. Admit it. If you were in a museum and there was a glass case labeled Richard the Turd or the Archdookie Ferdinand, you’d have a look. What I don’t quite understand is why these items didn’t get the royal flush. How does a bishop’s manor or a castle fall into ruin in the first place? Does it happen gradually, or all at once? Kingdoms come and kingdoms go, as do kings; but wasn’t someone supposed to take out the last poop? Or–was there a panicked exit in the face of an invading horde, and the poor monarch just let go? Fear will do that to you. No one talks about the basket on the butt side of the Guillotine, but that doesn’t mean there wasn’t one.

But I think it’s equally likely that if our preserved poop was indeed of royal provenance, it was left on purpose as a political statement. The empire was crashing all around, and some poor downtrodden sod with the worst job in the kingdom left a pile behind for posterity. There, said the sod. Someone else can clean this up. And, several centuries later, someone does.

Well, civilizations rise and civilizations fall. Centuries from now, maybe some archaeologist will find the foundation of the White House and start digging. “Holy moly,” she’ll say, quaintly, “this shit dates from the Last Days. This might be an actual Trump Dump! It’s right there at the door to the West Wing!”

Hope she knows what to make of the brown paper bag with the burnt edges.