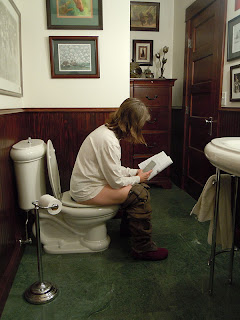 Kohler has developed a toilet that anticipates your every desire, because men simply do not spend enough time in the can as it is. It’s called the Numi and it can be yours for around six thousand dollars. It has a remote control.

The seat and lid open and shut on command. An extendable cleansing wand can be summoned at the appropriate time from the back end of the toilet to rinse your target area, followed by a quick blow-dry, which is exactly half as much fun as it sounds. User presets allow individuals to customize their personal target area position. There is an iPod jack on the remote in case you prefer musical accompaniment, and it comes pre-loaded, like a new wallet with a photo, with John Fogerty’s “Doo doo doo, looking out my back door.” There are three flush options, Number One, Number Two, and Nelly Bar The Door. A pop-out hemorrhoid abrader, conditioner and a light comb-through are optional. And if you look carefully in the back left corner, you will find the toothpick and the little tiny scissors attachment. 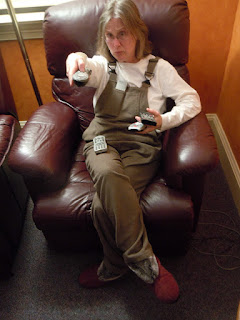 What disturbs me is the remote control. Already there are way too many remote controls in this house. Nothing we have seems to operate with fewer than two. The television has one remote for changing channels but we have to find the other remote to lower the volume and you still have to walk over to it to turn it on or off. We also have a stash of orphaned remote controls that do not operate anything, as far as we can tell, but they’re like mystery keys–we can’t throw them away. Decades ago I picked up something advertised as a “Universal Remote” with which I hoped to be able to operate my stereo, my CD player, my TV, my video player, and everything else. It’s possible I botched the electronic introductions required, but that sucker never did anything. Although I did not check the toilet seat. I may have misjudged the purpose of the Universal Remote, and if it turned up the spin on Venus, I didn’t notice.

The Japanese are the originators of excessive toilet technology. They live in a jiggly country, and the illusion of being in control of something is dear to them. They also put a premium on personal cleanliness and are enamored of technology in general, and the overachieving toilet is the happy product of those attributes. Here in America, the very same factors coupled with a less rigorous educational system resulted in the invention of the plastic doggy tennis-ball thrower. 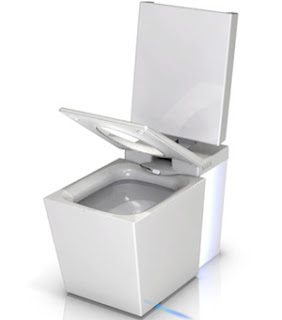 I’m not accustomed to having to feel stupid while on the toilet. The toilet is one area in which I usually have everything well in hand. I may have courted catastrophe on the way to the toilet, but once I’m there, I’m usually good to go. I know what to do, and an instruction manual would only depress me. The toilet is where I go to get away from that. It’s just me, gravity, and a decent flapper valve. Sometimes things don’t work out, but I never have the sense that my toilet is looking askance at me, or that I have disappointed a fleet of engineers. If something goes wrong, I want to be able to fix it with a plunger and a little bleach. I don’t want to have to shut the whole thing down, wait thirty seconds, power it up again and cross my fingers. And I hoped to be years away from having to get a twenty-year-old to help me in the bathroom. 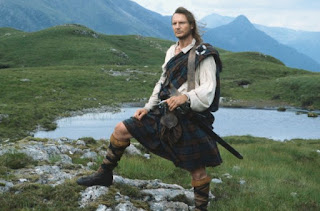 So I don’t think I’m going to be buying a Kohler Numi. But I am inspired by the effort it took to trot this baby out to market, and I’m working on a little invention of my own. It’s a bed pillow. It will have a revolving terrycloth drool strip and a built-in rapid eye movement detector that activates a subliminal recording. Mine will be set on Liam Neeson. In a kilt.