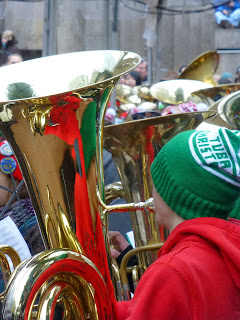 I’ve said it before. I go to the Tuba Christmas to visit my childhood.

It doesn’t matter that horns were not a part of my growing-up. “What instrument would you like to learn to play?” my father said, and I told him trumpet, and there was a little pause before he asked me if I meant cello.

We were a few minutes late for the Tuba Christmas concert on the square downtown. They were already into a deep, majestic rendition of Hark The Herald Angels Sing when we walked up, accompanied by a passing fire truck that cut loose with a baritone blat that only enhanced the performance. Here’s the thing about tubas. You hear them through your ears, and you hear them through your feet, and they set up a seismic rumble in your viscera, in the most vital and fundamental part of you, and that’s important. Because that’s where the small person you once were lives. The small person has never gone away, but she is buried in layers of flesh and time, and she’s harder to hear, until the tubas tremble her up again. 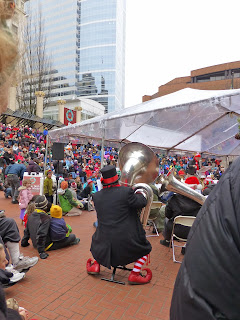 The audience is beginning to sing this time, most of us tentative, but the cover of brass makes us braver. A Christmas carol funneled low and slow through a tuba bell is accommodating to a person who no longer sings. I sang in all of Miss Nina’s choirs. Miss Nina assembled them all herself, even sewed all the robes, and I started in her baby blue choir. My tryout was family legend. Evidently I got hold of a corner of Jesus Loves Me and let ‘er rip. “You broke the sound barrier,” the grownups said. That was a new thing at the time. They were just then making aircraft that would break the sound barrier, so people were taking liberties with the phrase. It’s doubtful that I had hit speeds of 800 mph, but I was clearly not lacking for enthusiasm.

But the tubas allow even a person who used to be a reliable soprano to push out a few notes in her remaining lower register. My rusty new tenor soared with the herald angels. But with angelic hosts proclaim was one note higher than I now have. My vocal range had compressed and settled into a thin felt, like years of dust on a trunk. My note broke in two, one part bleat and one part sob. It wasn’t just the challenge of the note. It was that the note was tied to a string and the small person deep inside was tugging on the other end. 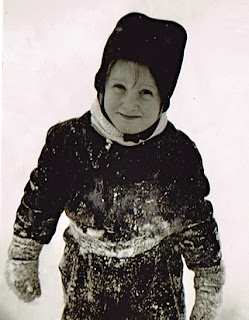 Look! the small person said. Mommy had one hand and Daddy had the other. She was in her little boots and stamping in the snow. Downtown, somewhere, where all the windows had displays. It was snowing inside the windows too, and frost sparkled the corners. Mechanical Santas turned this way and that. Reindeer arced up high. A train chugged by, right at eye level. There was a horse, with jingle bells. A real horse? Maybe. Peace on earth, and mercy mild. Was it possible to be happier? Happier than this? She tugged on the string again. Look!