Dave stood rigid in the back yard. “The birds,” he said. “They’re after me.”

His tone was flat, as though he had just divulged that the FBI had planted a chip in his brain.

I’m used to this kind of thing. It doesn’t even disturb me anymore. Some of our newer neighbors, however, may not have had time to adjust. Many of them are still scarred by the afternoon we spent on the back porch when Dave was trying to teach me how to lip-fart. There was a lot of spraying, and correcting. I wasn’t very good at it. It probably sounded like an argument between Sylvester the Cat and Joe Lieberman.

Then a bird dropped out of the sky and crashed beak-first into his forehead. I jumped back. “Holy shit!” I said. “What was that?”

Dave looked bleak and resigned. A second bird swooped down and strafed the front of his shirt. He trudged towards the laundry.

Many people believe that being pooped on by a bird is a sign of good luck. This is just how people are. You could be standing on the sidewalk and get your torso flattened by a runaway truck and as long as you’ve still got one lung going up and down, people will refer to you as lucky. If you then got coated with bird poop, well, might as well buy a lottery ticket: your good fortune knows no bounds.

There have been a number of stories in the news of birds dive-bombing people. One blackbird in San Francisco was so famous and reliable, people sat in lawn chairs across the street just to watch the blitzkrieg. Brought nachos, and everything. And a red-tailed hawk made news in Stonington, Connecticut, whacking people upside the head, even the ones that did not look like pigeons.

Then there was the mail carrier in Tulsa who was repeatedly harassed by a mockingbird. As a former mail carrier, I am surprised this even became an issue. Anyone who has been tailed all day by a chubby postal supervisor in polyester pants and a white belt carrying a clipboard should be able to take a mockingbird in stride. However the station manager reportedly did take the customary action and distributed the standard bad-dog form letter to all the patrons on the carrier’s route, crossing out “dog” and inserting “mockingbird.” (Dog letters are the official postal response to a threat by a vicious dog. The supervisor prints one out, puts it in an envelope and hands it to the carrier to deliver to the house with the vicious dog. To which the carrier says, “no, you.“)

Among the useful tidbits I learned in my career was the observation that when you come upon a truly heroic pile of bird poop, no matter how curious it makes you, you’re better off not looking up to see where it came from. You’d think this would be obvious, but it isn’t. I once told that story to a group of friends one evening, and the very next day we were touring an ancient church and came upon a line of encrusted bird poop on the floor that stretched the width of the church like the net on a ping-pong table. Every single person looked straight up at the cable strung between the walls. Fortunately, nothing adverse happened, because Dave had lagged behind and drawn all the birds.

Last year, birds in Florida were affected by the harsh winter, which caused the palm berries to rot and ferment, adding a zing to the birds’ diet. Birds were crashing into things, pooping inappropriately, staying up too late and singing “Danny Boy” into the wee hours. And bombing people. 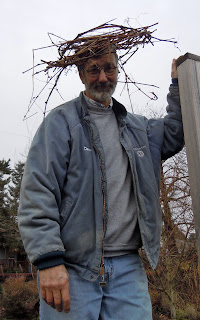 Dave’s tormentors are stone cold sober. Presumably he looks particularly threatening to nesting birds who are trying to protect their young, or who are trying to impress potential mates. I know I find it impressive. I could watch for hours. But for those who object to this kind of attention, there are several ways to deflect it. You can carry an open umbrella at all times. Or you could print out a large set of eyes and tape them to the back of your head. Neither of these solutions is likely to shine up Dave’s reputation around here.

It isn’t just birds. All flying things are attracted to Dave. We’ve used that to our advantage while picnicking, setting him off to the side a ways where he glumly ingests his hot dog while enveloped in a nimbus of mosquitoes. Perhaps he would be useful on a birding expedition as well. We can set him out in the field, throw away the spotting scopes and anticipate a close encounter. He’s tall and has a big head. Maybe if he stands real still near the water, he might even accumulate an osprey nest.

But now that birds are falling out of the sky in rafts, in Arkansas, and Louisiana, and Sweden, I think it’s best we just keep him inside. I’m as concerned about the birds as anybody. No one knows what’s going on, and it can’t be good. But if this kind of thing keeps up, my baby is going to be in for a serious denting.