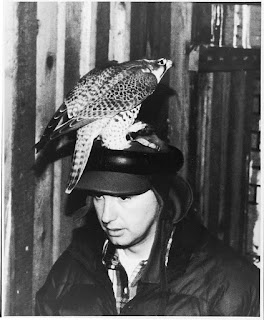 I guess everyone knows by now that the falcon sex hat is a thing. It’s been making the rounds on the internet. It’s old hat, as it were. Smelly old hat, but nonetheless.

The most disturbing thing about the falcon sex hat is not that someone might want a falcon to have sex on his hat. In fact, I’d guess a fair portion of people surveyed might say they’d at least like to try it once, and a lot who swear up and down they wouldn’t might act very different in private. Guaranteed, if some guy is railing about the evils of falcon hat sex on the floors of Congress, he should be checked for feathers on his way out of the bathroom stall.

No, the most disturbing thing about the falcon sex hat is that someone had a good idea it would work in the first place. The object here is to take your captive hand-raised falcons and make more falcons with them. The difficulty arises when falcons introduced in a mixer to not show any interest in each other, but rather to the humans who raised them. At that point if you’re going to get the pertinent fluid out of a bird, you need to make yourself attractive to him. He’s got to want you.

My first thought wouldn’t have been to make a sex hat. If anything, falcon sex underpants. That seems to put things more in the ball park. So if sex skivvies weren’t the first idea out of the box, that must mean they had a pretty good hunch about the hat. Which means peregrine falcons were already trying to mate with their heads. Dollars to donuts, the hat inventor was a guy with a bald spot.

The business portion of a female peregrine falcon looks more like a guy with a bald spot than anything else. So when spring was in the air, the falconers probably took to wearing hats just in the interests of personal hygiene. I know I would, and I’m not really a hat person. And then somewhere along the line, the light bulb went off–just after the falcon did, in all likelihood–and he said, hey now, if I make this hat such that it would be easier to scoop up the spunk, I’d be halfway to a new bird.

The hat has been around since the early ‘Seventies, when peregrine falcons were on the now-familiar brink of extinction. Lester Boyd, a legend in falcon sex, invented it. He wasn’t bald after all. Balled, sure. He died last month at the age of 77, and we salute him. It’s probably time for a new hat.

As far as transferring the donation to the females goes, a certain degree of consent is required. But that’s only right.

Be sure to turn up the sound for this.