Ripping A New One 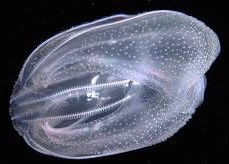 In a world proctically teeming with assholes, particularly in the seat of government, as it were, it’s a breath of fresh air to find out about an animal that doesn’t have an asshole at all. No, not the face mite this time. The one that doesn’t poop until it dies and then disintegrates on your face along with a lifetime of backed-up poop? We were happier not knowing about that one.

This one is safely in the ocean, which is basically a giant toilet anyway. The warty comb jelly (a.k.a. Sea Walnut) isn’t even packing, anus-wise. He just punches one through when he needs it. The rest of the time it’s nowhere to be found. Perhaps this should not be surprising. The whole ocean is full of weird bloopy creatures that don’t even know how to assemble a proper spine and it’s no wonder their priorities are way out of whack.

The warty comb jelly, on the other hand, takes in nutrition like everyone else and sends the extraneous bits down the gut, and then right before the grand exit, well: Houston? We have a problem. You’d think. But not for the wily warty comb jelly. He gets everything all lined up and then punches the poop canal into his outer envelope and suddenly there’s a hole and everything is taken care of, and then it heals back up. That’s as backed-up as he gets.

Fun extraneous fact though: the warty comb jelly has more than one exit plan. Everything comes in the front end and then there’s a fork in the road, and he can load up one side or another. Whichever branch of his poop apparatus he cares to evacuate, that’s the one he jams into his skin and rips himself a new one. He has not been observed, as yet, to operate both poop canals at once.

Which would be awesome. “Dropping a deuce” is just an expression with us, but what if Number Two really meant something?

But just because it hasn’t been observed doesn’t mean it never happens. In fact, that’s the other thing that’s interesting about this. People have looked at sea jellies before and drawn helpful pictures of them, and in all the pictures in the literature (“The Literature” is where Science is kept until it busts out), someone’s drawn in a little dot where the asshole orter be. And it took this one guy to have himself a look and notice that, actually, it wasn’t there. People see what they expect to see. And although most people never expect to see a warty comb jelly at all, at least in day-to-day life, when they do imagine the thing, they put a butthole on it. Which begs the question: what else don’t we know?

That is why it pays to become a scientist. We don’t know everything. Any one of us could have been the person to discover the warty comb jelly’s posterior peculiarity, but we didn’t. We’re just too danged busy.

That’s the lesson here. Don’t believe everything you think. Next time some asshole comes along and tells you what a horror show Socialism is, for instance, just tell him he doesn’t know everything, and ask him what he knows about warty comb jelly butts, and when he looks blank, say See? See? At least he’ll go away.