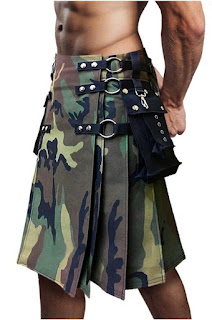 New shop coming in on Alberta Street where the doo-dad shop used to be. Stumptown Kilts. We didn’t have a kilt shop yet on Alberta and we have to cross our fingers that it will make it, stranded on a corner at least two blocks away from the nearest Thai or Mexican restaurant. Noodles and tortillas run this street like electricity, and you don’t want to be too far from an outlet.

I wish them well. I’m a fan of kilts. They’re snappy. I like the old time kilts best, though. A few centuries ago a kilt was basically a gigantic tablecloth, assuming your table seated fourteen, and half of it got bunched up into a skirt and the rest got wrapped around whatever chilly bits were left out: over the shoulder, around the bend, on the head, tucked into the waist. You had to lay it out on the ground and painstakingly fold over all the pleats, then lie down on it and cinch it with a belt. You could probably wrap your horse in it. It was an operation, putting that on. 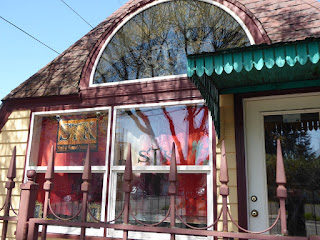 It seems silly to have to lie down to put your clothes on, but I remember doing it myself. In the old days when pants were supposed to be tight, and Spandex hadn’t been discovered, we had to lie down on the bed just to get them zipped up.

But the so-called “great kilt” got abbreviated at some point and now most men wear just the short kilt, although there’s still plenty of material involved. The classic great kilt and newer kilts are all gathered mightily in the rear and sides, and flat in front. Simple knife-pleasts, usually, but sometimes box pleats. I know box pleats.

I know box pleats because when we learned to sew in 8th-grade Home Ec, we had to make a box-pleated skirt, for some goddam reason. Each pleat is folded on both sides and stitched down. You start with a couple hundred yards of fabric and pleat your way to your tiny 8th-grader waist size, a number you will never see again. It was a giant pain in the ass. I don’t recall if I ever wore my pleated skirt, but I do remember it was blue and white gingham, unless that was the apron we also made to wear when we were supposedly learning how to cook but didn’t.

Anyway the modern kilt is much like that gingham number, and you don’t have to fold it up on the ground in order to get into it.

I get a big kick out of the men wearing kilts around Portland these days. That is because there is clearly a bit of pride involved in deciding to wear one in the first place, America being the sexually repressed place it is. “I am manly enough to wear a skirt,” the modern Portland man says, and just in case there’s any doubt about the manliness, his skirt is made out of some kind of poop-brown duck cloth you could make tractor tires out of. You know Carhartts? That material, folded ten ways to Sunday and fortified with extract of boar gristle. Doll that bad boy up with rivets, chains, buckles, a winch rope, tiny skulls, bear claws, and penis bones and slap on a sneer and nobody’s going to come after you.

Then top it with your sporran. That’s Scottish for “purse,” but no one has to know that. It’s worn right in front, and comes in various sizes depending on how much you’re planning to pack, or are already packing.

They also sell a “sport utility” kilt, but I’m pretty sure you can get a King Cab Super-Duty version with cupholders if you want. Whichever you choose, be sure to accessorize with your sporran, and mind how it’s hanging.