Roll On, Pink River, Roll On! 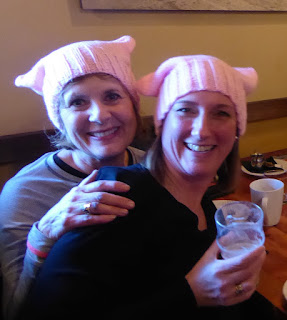 That pussy hat thing was pure genius, and successful beyond its originator’s wildest dreams. One woman comes up with a hat design so simple a rank beginner could make it. It has little ears suggestive of a pussycat; it’s pink, for girl power; it honors women’s traditional domestic arts; it allows women to snatch back (as it were) the term “pussy” from its vulgar associations, simultaneously mocking the new leader of the currently-Free World; and if it catches on, the Women’s March would be a river of pink. And oh boy, was it ever! Which means now I need a hat.

I put it out to Facebook: I need a pussy hat, but I don’t know how to knit.

Of course, I heard from women offering to make me a hat. Which made me realize I wasn’t really angling for a donated hat. Was I? I’m squeamish about accepting gifts, so what was I thinking? Here’s what I was thinking. I was thinking the phrase “I don’t know how to knit” was more or less equivalent to “I can’t dunk a basketball.”

It isn’t. And after all the generous offers of hats and personal lessons and the dozens of links to knitting patterns and crocheting patterns and video tutorials, I realized: well shit. I durn well orta be able to knit a pussy hat. Even if it’s a shitty one. In fact, I’m gonna do it! Rowr! 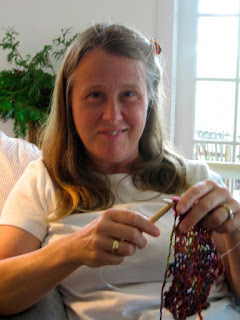 Still, my doubts about knitting don’t come out of nowhere. One fine summer I spent a week with friends at a house on the coast of Maine. The wide porches opened onto the Eggemoggin Reach, all sailboats and serenity.  Half of my friends could probably figure out how to knit a sweater for Siamese-twin octopuses, and the rest of us couldn’t knit at all. We decided to have a teach-in. We’d all make the same scarf side by side, sitting on that splendid porch, with all the time in the world. There was a yarn shop in town and we paid it a visit.

There’s the first place I went wrong. I just had to buy something fancy. After all, I’ve often thought I would have learned piano much sooner if I’d been given real music to play instead of stuff like “March of the Hobgoblins” that was written specifically to introduce the student to Triads and boredom at the same time. So I decided if I were going to make a scarf, it would have to be fabulous. I got some multi-colored yarn with nubbles and tufts and cowlicks engineered right into it. It was going to be swell.

But it was all nubbly and weird and I couldn’t see what I was doing with it. We sat knitting side by side and periodically I’d hold up my emerging rag and say “I think I messed something up, here.” One of the experts would cheerfully examine it and say “Oh see? You dropped a stitch way back here in the second row,” and then she’d squirrel a crochet hook through the thing like she was rescuing a hamster from a roll of chicken wire, and boom, she’d pop up with the hamster intact, and hand it all back with a smile, but no, I didn’t see, I never saw. I never saw my dropped stitch and couldn’t find the hamster and even if I had, I couldn’t have coaxed it back out if I’d put fudge sauce on its kibble.

I lugged around my half-finished scarf for years and finally gave it to someone who thought she could finish it, and I hope she has. 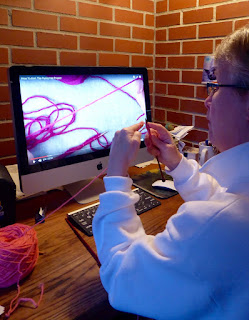 But I checked out the tutorial video for the pussy hat and it looks straightforward. I know I can do this. I just need pink yarn now, which, by the way, is utterly unavailable for the moment all across the country. Isn’t that cool?

Because if I’m going to go with you all into this brave new world, I’m going to need a pussy hat to remind me that maybe I can do things I think I can’t. And when all us protesters and bloggers and atheists-registered-as-Muslims and people with Black Lives Matter signs on our lawns are moldering away in the internment camps, whoever knows how to make a sweater out of mongrel fur is going to be a step ahead. There might not even be a piano.