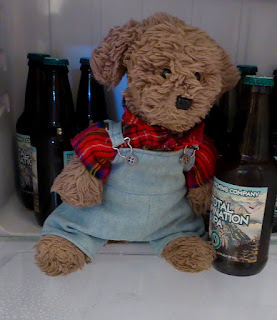 Dave peered into the beer fridge with concern.

“We have to make a Costco run,” he said. He was right. We were down to our last case of beer.

There are lots of people who might not consider 24 beers a panic situation, but we believe in planning and preparing and personal responsibility, and what if a couple bears showed up tonight with a bottle opener? No. It’s just too close for comfort.

I did say “beer fridge.” Let’s call it a legacy item. Forty years ago we got a small refrigerator and drilled a hole in the door and set it up with a keg. We did pretty well with that until we realized we were attracting more friends than we really wanted or liked or, in some cases, recognized. One day we didn’t replace the keg and that was that. But the little fridge had been there long enough to be a common-law appliance. We swapped it out for another small fridge and put our beer in there, with some chaperone sodas. We’ve had two refrigerators all this time. A full beer fridge feels like security. With a full beer fridge, we feel like we are in compliance with earthquake readiness recommendations. We’re not, technically, but it feels that way. Disaster? Ha. We laugh at your disaster.

We should probably get a bucket with a toilet seat and dried food and a water filter and a first-aid kit and Handi-Wipes and peanut butter and a lantern and a space blanket and a Saint Bernard, but the lack of a lot of those things can be mitigated with beer. Oh and we’re also supposed to have some firearms to protect our stash from our, uh, friends and neighbors and people in need, but we aren’t planning to change party affiliation or anything, so no.

Basically, everything I’ve ever read about a big-ass earthquake leads me to believe the full beer fridge is a solid first step. Followed by the bucket and toilet seat. Stick with the basics and you can avoid the full-on Donner situation. 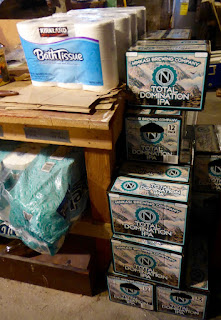 It’s been suggested that being hyper-aware of the number of beers on hand is a bit of a red flag, alcoholism-wise, but who’s to draw the line between a nice hobby and a debilitating disease? Also it’s not supposed to be a good thing if you obsessively check the beer situation at other people’s houses so you can go out for supplies, but what if you’re going to be there for hours and they’re Hefeweizen people? What then? Some people also think it is some kind of sign if you have to pull over when driving in a dangerous and scary situation to chug a beer before you can keep driving, which I have done twice, and both times were totally justified. Some people think being prepared to take care of your own needs is not a virtue. Suddenly people who think nothing of making sure they have life-saving heart medication on hand are all judgey about other people’s needs.

The real reason it’s a little nuts to panic when the beer gets low is that we are living spang in the middle of the best beer town in the whole world, and we can get any of thirty or forty different brews inside of a five-minute walk. If we actually ran out of beer, the solution is right around the corner.

But we’re prepared. We’re self-reliant. We’re the Mormons of the beer aisle. That’s not a thing, but if it were, that’s what we’d be.