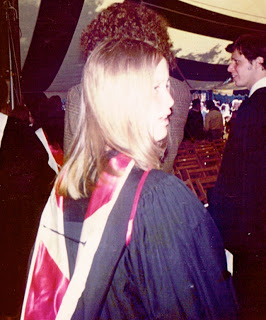 The country’s being run by pirates and nincompoops, we’re cooking the planet, I haven’t seen the third season of Downton Abbey but I already know who dies, and now I find out that Spree Day is in trouble.

Not many people would miss Spree Day itself, but it’s a troubling trend. Spree Day is celebrated at Clark University in Worcester, Massachusetts, my alma mater (Latin for “nourishing mother,” which is  apt, assuming your mother provides you with pot and Quaaludes). It’s a spring day on which all classes are cancelled, and no one is supposed to know about it until it happens. You can call up the administration office on any given likely morning and ask if it’s Spree Day, and if it is, you say (as I recall) “far fucking out” and hang up, and then you spend the rest of the day lounging on the lawn in front of the quad and throwing Frisbees and somebody sticks his speakers out the window and cranks up early Beatles, which makes everyone nostalgic for their youth, which was six years ago, and there’s plenty of cheap pot and sex, so basically it’s like every other day except for there being no classes. Which is a really big deal. It’s like Saturday. Or Sunday! And how often do those happen? Let me get my slide rule.

But now, according to my alumni newsletter, the kids have gone and wrecked Spree Day, and they’re thinking of doing away with it. There’s drunkenness. And vandalism. And sexual aggression. The administration thinks maybe if they encouraged the clubs to hold fun events like Midnight Bagel Breakfast on Spree Day, it might cut down on the raping. Back in the day, we didn’t even have clubs.

I’m trying to break it down, how kids could have changed so much in forty years. Sexual aggression was unknown. When the entire student body says “yes” all the time there isn’t much call for it. Sure, there were downsides, but as long as everyone had herpes it wasn’t such a big deal. Girls would have sex if the guy had a car and was willing to drive them somewhere in the morning, and guys would have sex if, well, if they didn’t have anything better to do for the next five minutes.

I read an article in the paper that helped explain it. Apparently no one gets care packages in college anymore. Oh, they do, in a sense, but it will not be homemade brownies in a brown paper package tied up with string. It will be a Gift Pak from an outfit such as from-mom.com with an assortment of store cookies and laundry soap and snack crackers and maybe some condoms. The kids are rootless.

We were warm and comfortable in our original fur, neither in debt nor in Vietnam, and our shoebox of brownies smelled like Mom and her apron and the oven-warm kitchen and love. Now the students are waxed and shorn and perpetually irritated by stubble, and they open their care package to find satisfaction that lasts only as long as a baggie of Cheezits and the slim warmth of a vision of Mom clicking “ship” at the stoplight. The pot is too expensive and too strong for anyone’s good, so they get drunk instead. The only thing being cooked is the planet, and the country is being run by pirates and nincompoops.

I don’t know what to do about any of this, but the first step has got to be more affordable pot. And way more brownies.