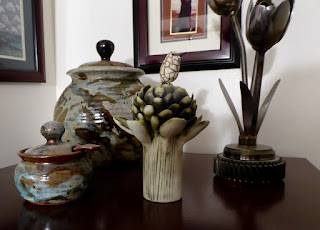 It is not true that we are entirely slovenly around here, or that we fail to notice the schmutz that accumulates despite our best efforts. Our best efforts are not all that great, but we do notice. And I would like  to point out that we clean our toilet at least once a week or more often as circumstances suggest. And by “we” I mean Dave. Dave took some kind of pharmaceutical as a young man that turned his pee bright orange, and as he noted, with horror, the pointillistic painting slowly creeping up the walls behind the toilet, he decided that if any domicile contained one man only, that man should be the designated toilet scrubber. I have, over the years, mounted no objection, because I believe in getting along.

In addition, several times a week I notice all the dust on the wainscoting and furniture in the bathroom. Yes, we have furniture in the bathroom. It’s a file cabinet. Where better to store all our tax returns than the toity? It’s in there because that’s exactly what fits in the corner that was designated (in the architect’s drawings) as the chase for the heating ductwork. We ended up using some crappier system that didn’t use ductwork to get heat upstairs, but thought it would be silly to just wall off that space, and so we got a file cabinet. It serves as a place to showcase some ceramics that we like. And they’re dusty. At least once a week, when the light is right, it occurs to me I should really clean it all off.

But that’s a chore. I’d have to take everything off the file cabinet and clean it separately and at least one of the items is a very fragile and delicate ceramic artichoke. The attached hummingbird lost its skinny little beak early on, probably in the concussion from my first colonoscopy prep. Anyway, it’s gone. And all it takes is a second or two of looking at that artichoke and I decide that although it could stand some dusting, it doesn’t have to happen right this instant.

The other day I took the pretty canister off the file cabinet to clean it up. I didn’t think there was anything in the canister. It was one of those items I bought in the ‘Seventies to store brown rice or whole-wheat flour or rice cakes or something in, back in the days when hand-thrown pots were routinely displayed on the kitchen counters of hippie households. But of course they either broke or were abandoned, along with the brown rice and whole-wheat flour, in favor of bleached grains, Triscuits, and snap-lid containers. This one has survived as a bathroom decoration for the last twenty years. I opened the lid. 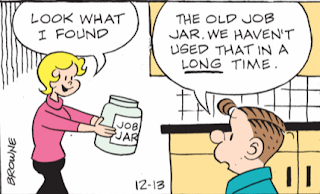 There was paper at the bottom. Scraps of paper, folded over. I picked one out and opened it up. It said “Use vacuum dust attachment to clean floorboards downstairs.” There was another one like it for “upstairs.” There was one that said “Clean out kitchen gadget drawer and toss seldom-used items.” One said “Test all the pens in the house and throw them out if they don’t have ink.”

Spank my fanny. It was a Job Jar!

I vaguely remembered that Dave and I had once decided to institute a Job Jar filled with useful but limited tasks that, if actually accomplished, would lead to a cleaner house. Clearly we recognized we had a problem. We were each going to pull out one job a week and do it. It wouldn’t take all day. Things would start picking up. It was doable. It was a great idea.

I don’t believe we ever took out a single Job. We forgot all about it. And here it still is.

The canister is clean. It looks shiny and nice. And I know just where it goes. There’s a clean round spot in the dust where it had been. It’s just a matter of centering it carefully.