Sequins In The Snow 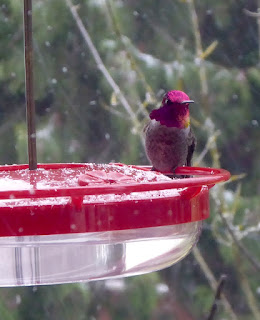 Gosh, I remember years ago, I’d see a single hummingbird whiz by in my garden and totally lose my shit and blast off to the house to cook up some nectar and dig the feeder out of the closet. It would be all scuzzy from the year before when I’d done the exact same thing. I’d change out the nectar a couple times but the little bugger would never come back, and come winter I’d take down the feeder and pack it away moldy out of sheer irritation.

But now! Now we have hummingbirds. You have to broom them away sometimes if you want to get anywhere. Most of them are Anna’s hummingbirds. And we get to keep them all winter. Unlike other sorts of hummers, they don’t migrate. It’s kind of a new thing. They used to hang out in southern California, but people started planting all those tropical trees and flowers and hanging out nectar stations and the hummers have approved of this all the way up to Canada. 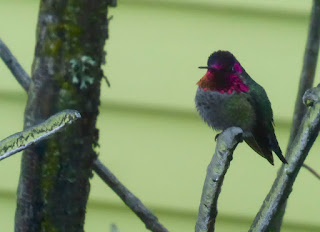 Of course there aren’t a ton of flowers to sip at here in the winter. The Anna’s seem to get by mostly on the feeders and on bugs and spiders. They can poke around in the bark and leaves for bugs but the spider deal is a neat setup. If they’ve got a decently industrious spider around, they can just pop by and nab her cache right out of the web like picking up groceries. Or, of course, the spider herself. Boop! Spider deleted from web.

The Cornell Ornithology people, who fancy themselves experts, say a flock of hummingbirds is called a “bouquet,” or a “glittering,” or a “tune.” Which sounds lovely, but there are no flocks of hummingbirds. Hummingbirds do not have a tiny social bone in their bodies. They’re all assholes. The males perch on a high twig and natter on for hours: tweedle tweedle tweedle, snick snick snick. It’s not much of a tune, but then again they don’t have a lot to communicate. Just this is mine, and this is mine, and that over there is mine, and so is all this too, mine mine mine. Any given hummer will spend 10% of his time feeding and the rest of the time trying to spindle any other bird coming in.

They do get together briefly for the purpose of making new hummingbirds but there’s not a lot of commitment to it. The male does a terrific courtship display by zipping up so high he looks like a sequin, and then swooping down and pulling up at the last second with a nice loud pop. According to the same Cornell Ornithology people, who are not to be trusted, this is a “curious burst of noise that they produce through their tail feathers.” Because of course that is the way to a girl’s heart. Academics don’t get out much. 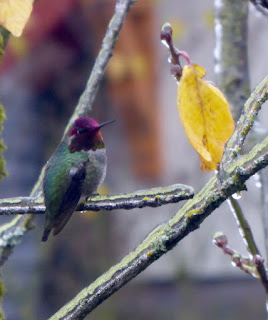 Your average hummingbird is all appetite and attitude because he’s never that far away from dead. They can barely make it through the night. They are obstreperous narcissistic little pissants that would totally be tweeting at three in the morning if they weren’t in a near-death state at the time, but they are. They spend the night hunkered down in a state of torpor, which is from the Latin for “might be dead, I don’t know, poke it and see what happens.” They’ll barely breathe. Their hearts will sludge up. They might even be so logy they’ll hang from a perch like an ornament.

A few weeks ago it finally got below freezing here. And as the dusk deepened into dark, I saw two females sitting right next to each other on my feeder and drinking nectar, inches a part. They stayed there for several minutes, tanking up, in an unprecedented display of mutual forbearance. I know what happened. Mercury started to plunge and those two looked at each other and said shit just got real and left each other alone.

But it’s that bad attitude what’s going to get them out of their state of torpor in the morning. Right around dawn they’re going to be thinking well, one option would be to just die, but then they’ll get that mental image of the feeder with somebody else already at it and zzing. They’re off to kick some tiny fuzzy ass again.